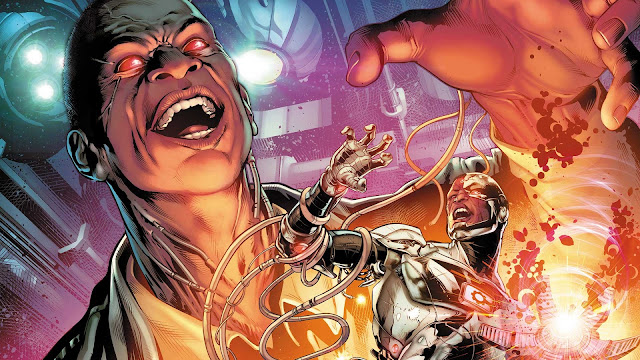 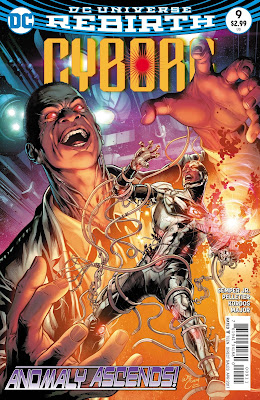 The Imitation of Life arc continues to imitate a Cyborg story with this issue.......... Well, that's a bit harsh, I'm only trying to get at that this story arc has been going on for a long time now and it's really just doing the same old things over and over again.  Cyborg fights a cyborg, Frankenstein references littered throughout and finally, our hero being no closer to stopping the big bad that's been impersonating his father........ who we found out last issue is called OTAC.  I'm just getting a bit bored with this and want to do other things with Cyborg because on top of all that other stuff I just mentioned, we're spending a whole lot of time just chilling in STAR Labs and it's getting old.  Hopefully this backstory to the big bad of this series will bring me around and make me a fan, but at this point, that doesn't seem likely.  Let's jump into this issue and check it out.

Our issue begins where we left off previously, with our hero taking on the villain that we found out was called OTAC........... Well, that's its official designation based on how he was made, what he really prefers is Anomaly.  Yeah, we find out this issue that Anomaly was brought into this world by Dr. Stone getting all overzealous about his wife and his work on an artificial cell that is able to be programmed and when he rushes the creation of this cell, he causes an explosion that ends up giving his wife cancer from the radiation.  Because of his hubris, Dr. Silas Stone believes that he can create some good out of this bad situation and uses the OTAC cell that he created and programs it to become thirteen clones of himself with cancer, that he then tries to find a cure for.  Too bad, he wasn't quick enough with it because his wife died and with no further purpose, he orders the OTACs destroyed, but a handful of them are taken away and sold to black market research, where they tested and tortured the OTACs until Anomaly became sentient from whatever they did. 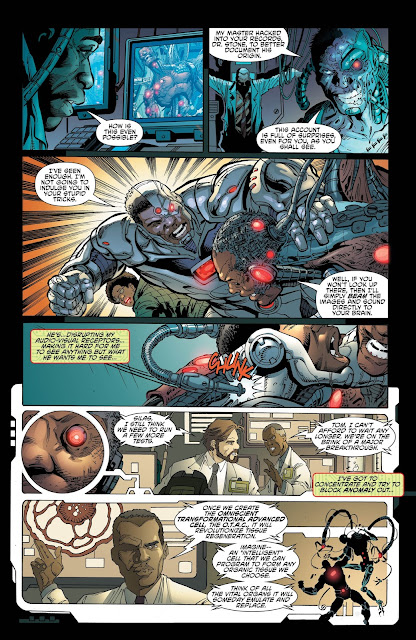 The only upside to Anomaly's terrible, tortured life was that one of the scientists actually took pity on him and overtime, became Anomaly's friend.  This friendship led the scientist, named Aldous, to try and allow Anomaly to escape his capture, but instead of escape, Anomaly took his revenge on the humans that tortured him by ripping them apart........... which, even though Aldous was Anomaly's friend, he was still human and because of that needed to be punished.  The punishment was becoming Anomaly's cybernetic lapdog, who's currently keeping an eye on the real Dr. Stone. 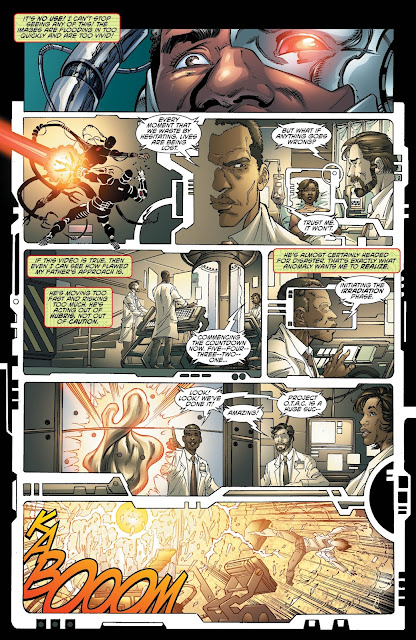 In the end, after the cyborg mind meld, we find out that Anomaly wanted to take his creator down and that's what this story has been all about.  Cyborg, while initially looking like he was going to be able to take Anomaly down, is blinded by Anomaly's malware, forcing him to boom tube away with Exxy so that the two could regroup and begin the fight once again, after Cyborg is back to being tip top that is. 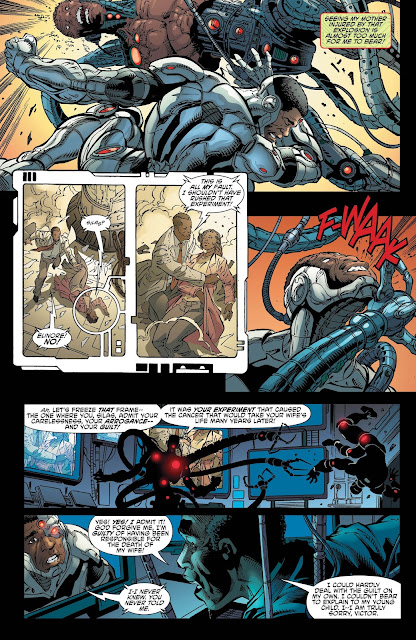 That's it for this issue of Cyborg and even though I'm happy that we finally got the backstory to our big bad, now calling itself Anomaly, the backstory we got wasn't all that great.  I mean, it has a bunch of callbacks to things we saw previously in this series concerning Victor's younger years and his mother's death, but the fact that we get this story and we still don't even know exactly how Anomaly was made because he says he doesn't know either, it just comes off odd to me because he wasn't the only OTAC being experimented on....... or even why he was, as he puts it, the most human looking of the OTAC clones.  it's a very vague backstory that really just leads us to a "Kill all humans" scenario and with that, this issue really doesn't get us any further into our hero conquering the big bad and leaves us where we've been left a handful of times already.  The art in this issue is okay, but even with that, the colors are drowned out and dull looking.......... which some people might like, but I always look forward to a bright and vibrant book when I'm diving into a comic.

While we finally get the backstory to our big bad in this issue, I found myself coming away from it thinking that it wasn't all that interesting for having to wait so long to get it.  Yeah, it calls back to things that we've seen previously, which I always enjoy, but overall, this issue doesn't really move us that much further than where we were previously.