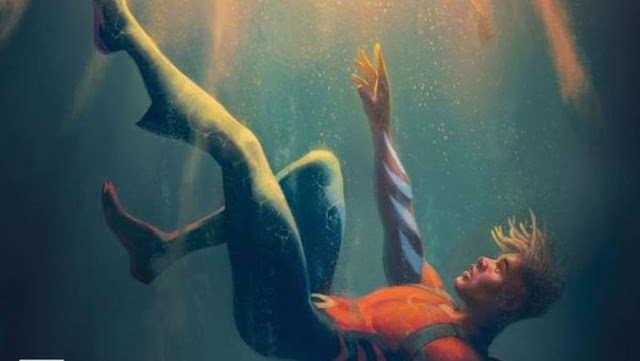 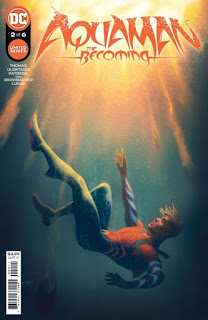 In the Criminal Justice System, the people are represented by two separate, yet equally important groups:...

Aquaman: The Becoming #2 is a Mera-focused issue flashing forward and back to find out what happened to Jackson Hyde after his escape from the Atlantean police for a crime he may or may not have committed. When Mera is brought in for questioning, we learn how Atlantean police use deception and scare tactics as a cover for their bigotry against Xebel.

Issue #2 has a completely different tone as compared to the first issue. Where issue #1 was a wholesome, slice-of-life depiction of Jackson Hyde as the "All-American Teenager" living his best life until the rug gets pulled from under him, issue #2 feels more like a tense police drama akin to Law & Order. The shift in tone and maturity of content felt jarring but with the caveat that this issue is still very well done.
[SPOILERS AHEAD} 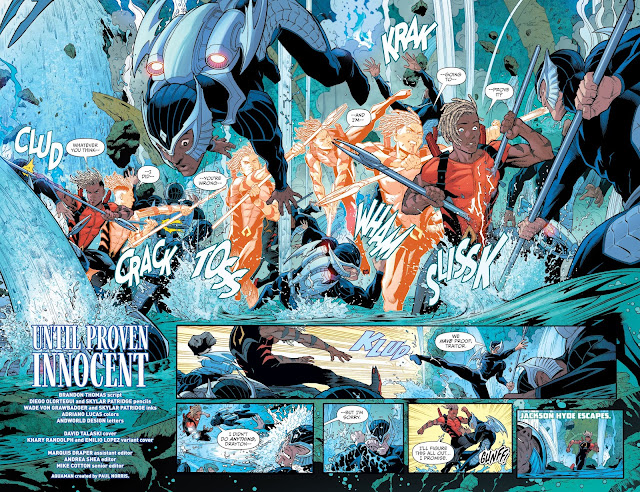 We pick up at the end of the last issue where Jackson comes out of the Well surrounded by Atlantean police trying to arrest him for treason. We learn through snippets of conversation between the police and Mera that Jackson is recorded on video planting a bomb from a terrorist attack.

Again, the issue is largely focused on Mera and the police during an interrogation. The strength of the story comes from how smart and capable Mera is portrayed when she continually sees through the police interrogation tactics. when the police try and get her to confess any incriminating statements, Mera knows all the tricks and manages to turn the tables every time.

The down point of the issue is the private conversations between the police that portray deep bigotry against the people of Xebel. It's down not because it couldn't be possible but because it's a little too on-the-nose for the anti-police sentiment. You might as well have put #ACAB somewhere on the cover. 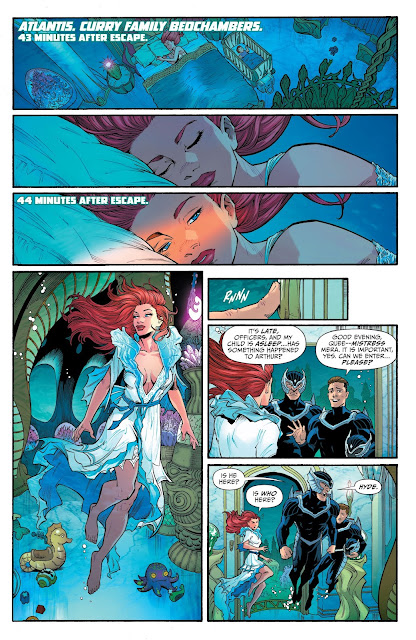 That said, the cat-and-mouse wrangling between Mera and the police is very well done, and Mera plays every tactic to her advantage. When Mera eventually leaves, we get a little more insight into Jackson's location and the hint that people close to Jackson may indeed be involved.

The art is excellent in this issue, especially through the use of facial expressions for the characters during the extended conversation. It's surprising how good the art looks considering multiple artists were working on the same book at the same time. If there's a style shift, it's not noticeable.

Aquaman: The Becoming #2 is a jarring shift in focus and tone from issue #1 as a slice-of-life-with-a-little-drama comic to a police procedural drama. The characterization of Mera as a shrewd (and slightly combative) person of interest really sells the drama. The art is great considering the multiple artists, and the mild cliffhanger hints at a bigger conspiracy that piques interest for what's to come.