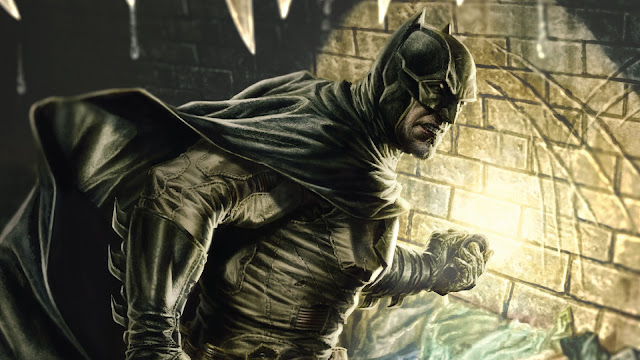 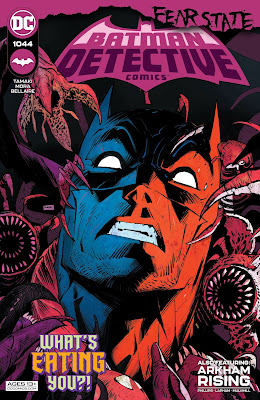 Batman's pretty darn busy during this whole Fear State thing, and in Detective Comics he's found himself trapped in the sewers with Mayor Nakano. I was unable to review the last issue because of life, and although I did end up reading it I have completely forgotten how they got there. It doesn't matter though, because I really liked this issue anyways.

We start off with good ol' Deb Donovan drinking at a bar with somebody I'm assuming is a legislator or some kind of politician. Maybe he was in the last issue? Huh. Maybe I should go back and read it. But first... drinks. It looks like she's probably got a shot of tequila while he's drinking something called a "New Vigilante". It's whiskey infused with charcoal and a black olive.

Don't they give you charcoal at hospitals to make you purge your stomach? Whatever, I'm game. Anyways, they're talking about the city's water supply. And she's right: water is politics. There's some kind of thing going where I live where the water employees are on strike and the local representatives want to get rid of the department all together or something. Did I really write two paragraphs about one page that doesn't go anywhere?

Next we see one of Vile's victims, or even Vile's body himself, in the morgue under a sheet with their feet sticking out. Cause of death is parasitic infection. There's a gross red lumpy thing on the floor and the wheel of the gurney gets stuck on it. We get a close up of it, and we'll see another one of these things later.

And now we go down to the sewers. It's collapsed between Batman and Nakano, separating them from each other. Batman gets ahold of Barbara, but the connection is weak so not every word is getting through. Nakano has no signal on his phone at all. Bats is very concerned because these sewers have been bombed twice in the past two weeks and they really can't be all that stable, so they've got to be careful on what they do next.

But then we have an intermission. This scene is in an unlit dark room, so every color is black or grey... except for red. A redhaired woman walks into the mayor's office, asking for Mayor Nakano. She's told that it's been taken over by Nero XIX and that she will pay for her ignorance. That's when she pulls out her cowl and reveals herself as Batwoman, then just wrecks house in seconds flat. It's pretty friggin' cool.

Back in the sewers, Batman sees bugs starting to crawl towards him. Bugs he's never seen before, but he quickly realizes they are a product of the deceased Hue Vile. Not wanting to cause any unnecessary vibrations before, NOW IS THE TIME TO YELL! So he calls for Nakano on the other side of the rubble. They start to communicate, but Nakano does not want help from Batman. He wants the Magistrate to come get him, but he has no signal to call them. Batman tries to talk some sense into him, saying there's another side to every story.

But then Nakano turns around and sees a larger red blob than the one we saw at the morgue. The lumps start to pop, and the same bugs that Batman saw come crawling out. He starts freaking out as one of them gets on his hand, while Batman yells at him from the other side to get it the heck off of him. This part was so well done, I love it. The bug opens up Nakano's skin and crawls inside his hand as Batman continues to yell at him to get it off. More bugs come crawling at him. And there's A LOT!

No time to mess around now! Batman uses his grappling gun to tear down the heap of rubble and get to Nakano who's now covered in bugs. Bats even tases Nakano to kill the bugs climbing all over him. But is it too late???

A creepy crawly story comes just in time for Halloween and I'm diggin' it. This issue is mostly atmosphere and build up to an intense climax and cliffhanger, but Batwoman walks in calmly at halftime just to swiftly dish out a few panels of action. Overall I thought it was well executed and shows Tamaki can be effective when it comes to sending out horror vibes. I hope she continues that feeling, because she's got Dan Mora's incredible art to really bring it home. Use it.