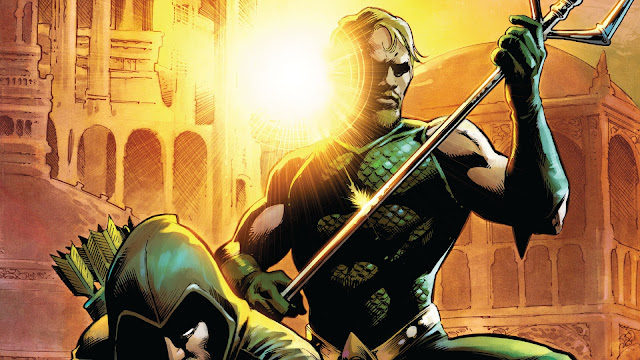 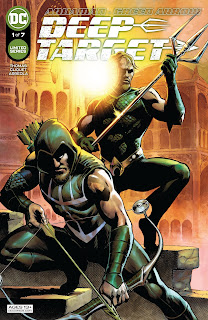 Writer: Brandon Thomas
Artist: Ronan Cliquet
Cover Price: $3.99
Release Date: October 26, 2021
While I am not the biggest Aquaman or Green Arrow fan out there, I do like both characters and feel they each should have a solo book at all times.  Sadly, neither of them has one right now, and to add insult to injury, Brian Michael Bendis is mainly in charge of writing them.  You know, the guy who thinks Arthur needs to be doused with a glass of water to power up.  Ughhhhh!!!  Thankfully, this book has arrived, and I am sure that fans hope this can be an alternative to Bendis, like Chip Zdarsky's Justice League: Last Ride.  While that may end up the case, this first issue was a bit tough to settle into, and I am worried about it going forward.
I will point out one major flaw of this first issue right off the bat.  It takes way too long to get to Aquaman and Green Arrow.  We don't see their faces until the halfway point!  That is too damn long!
As far as the story goes, we start with a confusing set up with a team of possible bad guys setting up what might be a cosmic treadmill with a plan of bringing back dinosaurs for some reason.  Everything is so unclear, but in a way that leaves you dumbfounded and thinking, "where the hell is Aquaman and Green Arrow?!?" 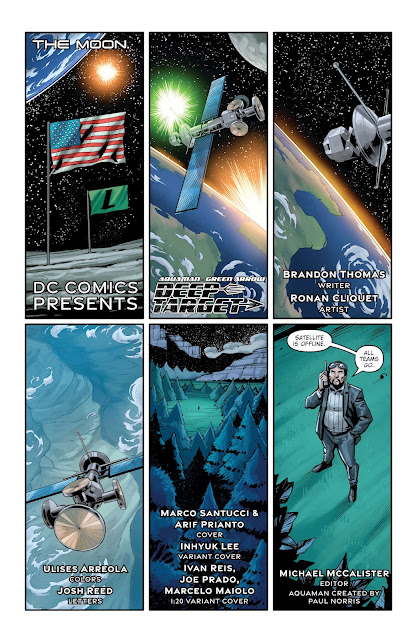 When we finally get Green Arrow, we don't even see his face as he jumps into the ocean in a high-tech diving suit.  Alright, we finally get one of our main characters!  But then the scene shifts to some Atlantean guards talking about stuff that they should probably take up with their HR personnel or Union Rep.
We finally get some cool underwater Green Arrow action, leading to our two main characters face-to-face for a fight.  A fight?!?  Yep, things are wonky at the moment, and Arthur and Ollie blame each other at first.  There are some laughs at how similar these characters' appearances are, but besides that, all we get is a very long fight scene that is not that clever or exciting. 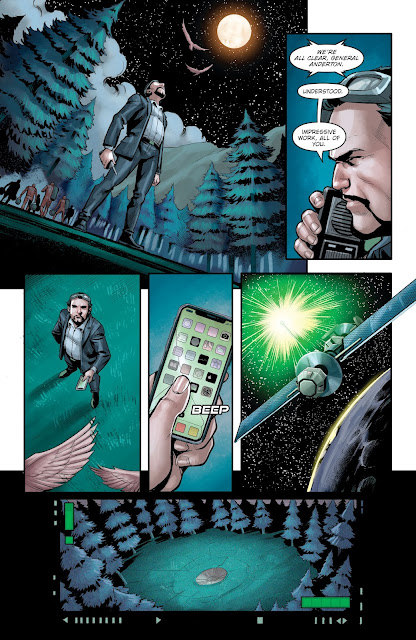 There isn't much more to this issue. Finally, our heroes come to a truce, and we end with a cliffhanger that might mean something to Brandon Thomas, but I was left feeling like I just wasted 15 minutes of my life.
There might be a story here, but the crumbs we got were not tasty enough for me to try and figure it out.  I thought the art was great, but even those starved to get more Green Arrow and Aquaman might want to sit this one out.  It could get better, but this start was horrible.
Bits and Pieces:
This confusing and convoluted start took too long to get to our main characters, and did nothing with them once we got them.  I don't know who the target audience is for this book, I just know it isn't me.
5.0/10
Posted by Jim Werner