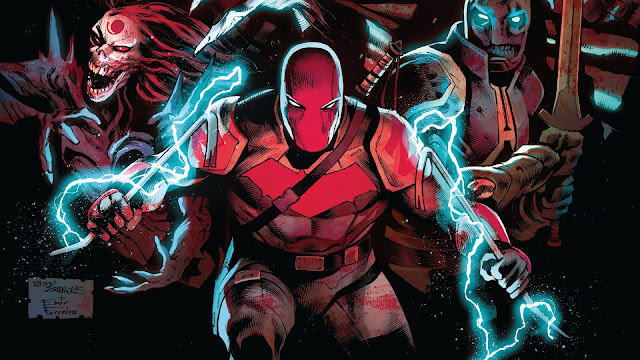 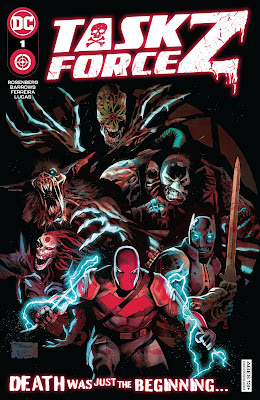 It's the spooky season and what better time to roll out a new year-long series featuring our favorite Outlaw, Jason Todd, and a group of Arkham inmates, reanimated after the events of A-Day and thrown onto a team that will make Task Force X look like a bunch of chumps? The answer is, there's no better time. Let's jump into this issue and see what Task Force Z is all about and how Jason Todd plans on keeping a bunch of flesh-hungry villains on the straight and narrow long enough to finish their missions. Let's check it out.

Now from the title and cover of this book, I'm pretty sure...... Well, maybe with the solicit too, I'm pretty sure that you have an idea about what this book is. Jason Todd is leading a group of recently killed-off villains who have been brought back as zombies and this group is going to go on random missions just like the Suicide Squad..... but are zombies. Now that is the basic gist of this and that's what you will get out of this issue but the deeper story is kind of elusive in this issue. You see we have the organization who is putting this together, Project Halperin and you'll get some people outside of Jason Todd who work for this project and possibly the big wig involved but what this is actually about beyond random missions and possibly just tracking down Lazarus Resin remains a bit of a mystery in this first issue. 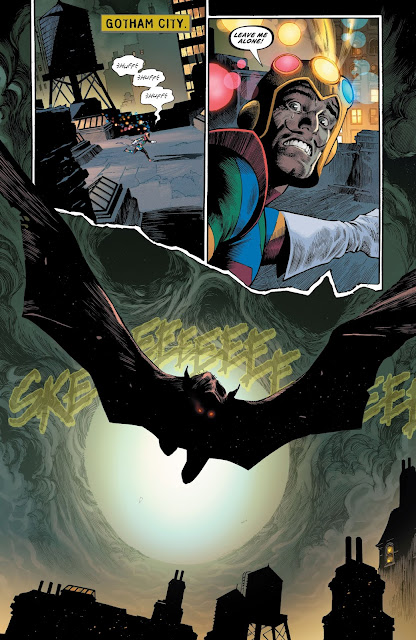 So yeah, you won't get a deeper meaning about what this series is in this first issue, but what you will get is some fun-ass action that puts Jason Todd in multiple situations that I never thought would ever be a thing and deepens the background on what Lazarus Resin does, which is good since we first saw it in Future State and are now seeing it in Suicide Squad and this title. The zombie team is great and where I originally thought it would just be dead versions of these villains we do see that these are Walking Dead, flesh-eaters who are just barely kept in control and this idea of never knowing how zombie-like these zombies are going to be is an interesting concept that will keep readers on their toes. 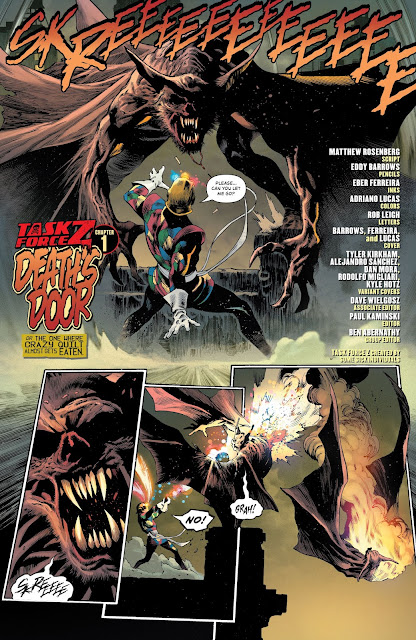 All in all, I enjoyed the art in this first issue, and seeing this team of zombies led by Red Hood go on two missions against other Batman rogues was fun as hell but all the background stuff about this team, who's really behind it, and why is left pretty ambiguous here and that's a bit disappointing because this series even though it was proceeded by a backup that was supposed to get us here feels kind of out of nowhere with what it's doing and I would have liked a #1 issue to really give us some idea of what we're dealing with. I still had fun with this though even though Mathew Rosenberg is keeping the secrets of this series quiet for now but I hope we don't go too long without learning something here.

While you won't learn the hows or whys of this series this first issue, what you will get is some great art and Jason Todd leading a group of zombies who just want to eat people into a couple of missions, Yeah, I would have liked some more answers to what's going on here but I still had fun with what I was given because it is a crazy concept that comes off really fun conceptualized in these pages.