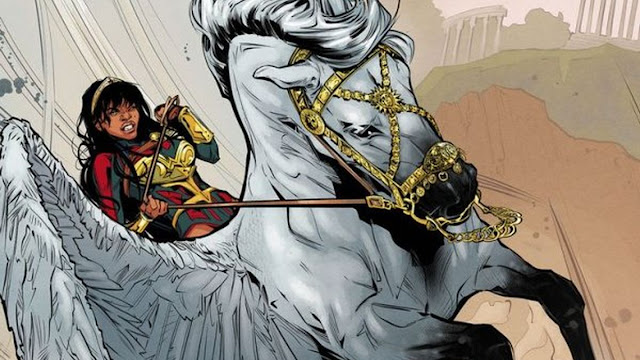 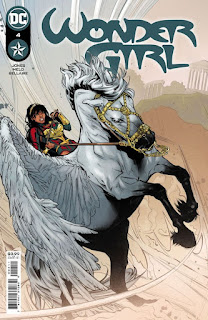 A New Beginning... Sort Of

Wonder Girl #4 picks up after a hiatus to find Yara Flor training with Chiron in the outskirts of Mt. Olympus to become Hera's new champion. When the truth of Yara's lineage is revealed, she must decide where to place her loyalty.

Issue #4 is an improvement over issue #3 in that the story is more coherent and flows logically. Overall, it's a fairly decent progression for a completely original character in the larger Wonder Character mythos. That said, there are gaps in the transition from the first arc to the second arc that are not explained or just plain ignored, making this issue less satisfying than it should be. 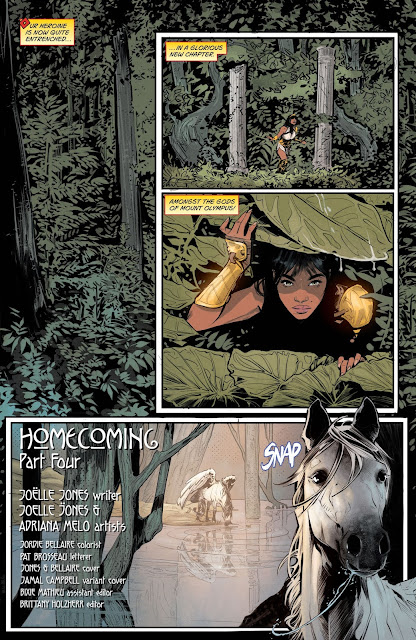 When last we saw Yara, right before a brief series hiatus, she was carried away to Mt. Olympus by the gods. When we pick up in this issue, Yara is in full Olympian garb and undergoing intense warrior training under the tutelage of Chiron the minotaur.

The logical question to ask is how did Yara get from point A to B. Prior to the plane crash, Yara had no memory of who she was, her powers or whatever agreement between assorted world powers was threatened by her arrival in Brazil. Yara is simply there in Mt. Olympus training to be Hera's champion.

Of all the gaps, that's the biggest and hardest to swallow. Wouldn't you be confused by suddenly being presented to Hera at Mt. Olympus when you were just an American tourist a few hours ago? wouldn't you have questions? Wouldn't you need to hear a very compelling reason why you should be trained to become a champion for the gods?  These are all questions any sensible person would ask, and you get none of that in this issue. You feel like Jones skipped several big moments in Yara's journey, and that's the exact opposite of what readers want in an origin story. 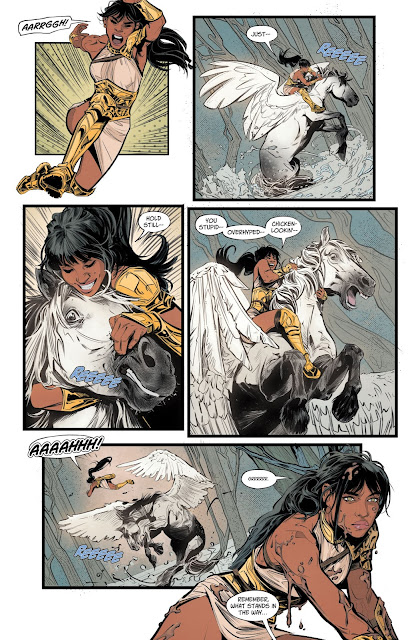 Fine. Let's pretend it all happened and it's not important to the story. Past the initial meeting and Yara's acceptance of her new role, there are still so many questions that remain unanswered.

What happened to the plane crash? What happened to Joâo (Note: we see him in this issue, but everyone simply acts like everything's normal and Yara just stopped by to say 'hi'). What is this great global threat that Yara has caused by arriving in Brazil?

It seems as if Jones wants to discard nearly everything that happened in the first three issues and start Yara's story from this point.

To be fair, the moments between Yara, Chiron, and Eroswork well enough. In isolation, this is a pleasing issue, particularly because the art break between Jones and Melo wasn't as jarring as in the last issue. So, you could say this is almost a good jumping-on point for the characters, and reading the first three issues creates more confusion than it resolves.

Wonder Girl #4 picks up well after the last issue, and further still, largely ignores most of the story that led up to this point. Many of the unanswered questions surrounding strange events happening once Yara arrives in Brazil are ignored or briefly answered to get them out of the way. The art is excellent in this issue and the transition between Jones and Melo works a lot better than the transition in issue #3. It's a fine issue but unsatisfying if you've followed the series from the beginning.