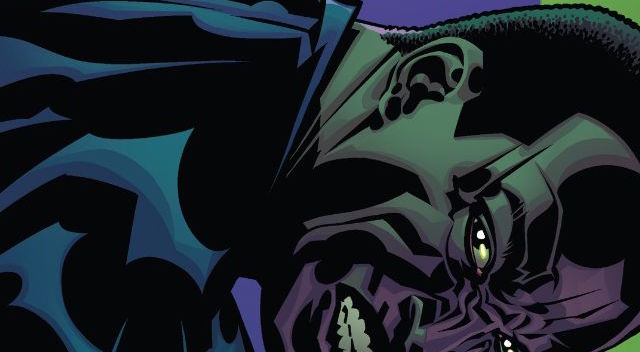 Don't Ever Disrespect My Mother 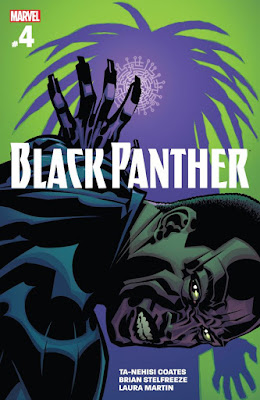 *NON SPOILERS AND SCORE AT THE BOTTOM*

As most of you guys know, I am a huge fan of this book. It features one of my favorite Marvel Characters, with a new writer who is bringing us a fresh  perspective on Black Panther. We all know he is the king of Wakanda, we all know he protects his nation and the world from impending doom, we all know that with great power comes great…um, wrong guy, sorry. As I was reading this issue, I wondered how a new writer to the comic book medium is able to do something that a veteran like Dan Abnett seems unable, and that is tell the story of a king trying to balance his duties to his people as well as fulfill his role as a hero. So let's jump into the issue and see if the momentum is still going strong with this arc.

We start off with a recap in the form of a meeting with T'Challa and his top advisers. I like this better than recap boxes, and it gives you the feeling of watching a scene from a movie where an army is going over retaliation strategies.

I appreciated the recap of what happened to the Man-Ape too, since that ended on somewhat of a cliffhanger. We see what is happening all over Wakanda, as a revolution is occurring everywhere. We also see a flashback of a young Tetu and how he deals with charlatans. I wish we had more of these flashbacks so we could see more about his origin. He, along with the Midnight Angels, are intriguing characters, and I am still more interested in them than Black Panther himself.

Tetu meets up with the Midnight Angels, and they decide to work together against their common enemy. That's not good for T'Challa since they were tough enough on their own. We transition to a scene with T'Challa and his mother, and she sets him straight. I really liked this part, it’s T'Challa saying he has given his all to save his people and the world, and his mom pointing out that he never did it willingly. It gives things some perspective, most super hero comics never really deal with these kinds of concepts in a way that doesn't feel forced (again, take note Dan Abnett.) 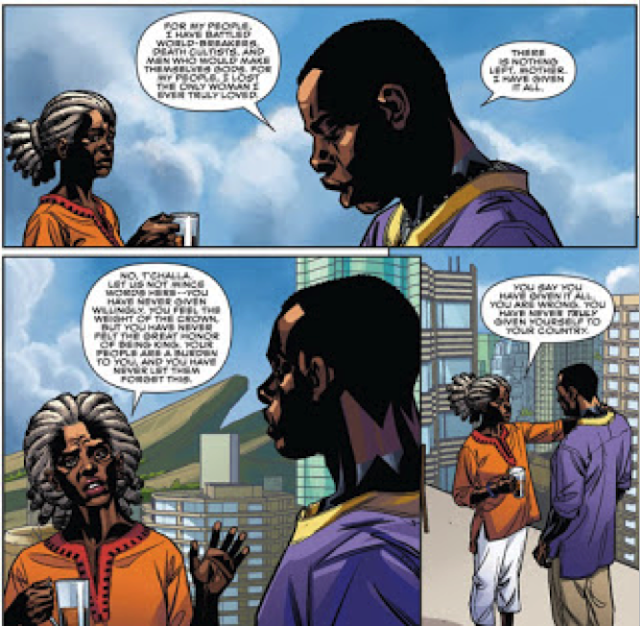 Black Panther then goes before the people with his mother, and it for now they seem glad to see them. Back to Tetu and Zenzi: he is doing some sort of ritual using his powers and a mystical flower. Then, he meets up with Ezekiel Stane and at the same time there is an explosion among the people Black Panther and his mother were greeting. There are casualties, and his mother was injured in the blast. It looked like she was dead, as Black Panther carried her like Batman carrying Jason Todd, but we later find out that she survived. 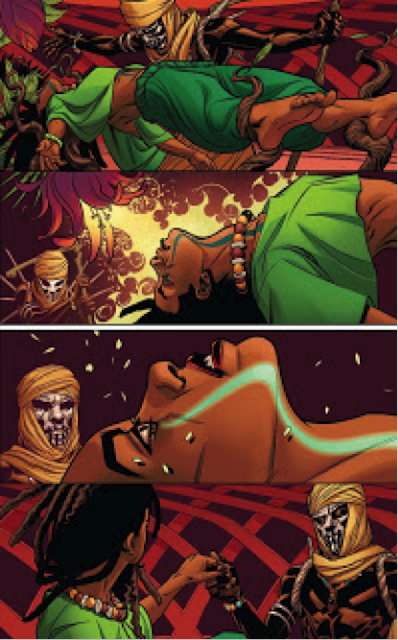 At this point, Black Panther stops treading lightly and deals with all of these "terrorists" head on. He tells his council that they are terror itself as the issue concludes. I really like the way these panels were done. It gives you a sense of Black Panther’s urgency, and the council’s concern as well. 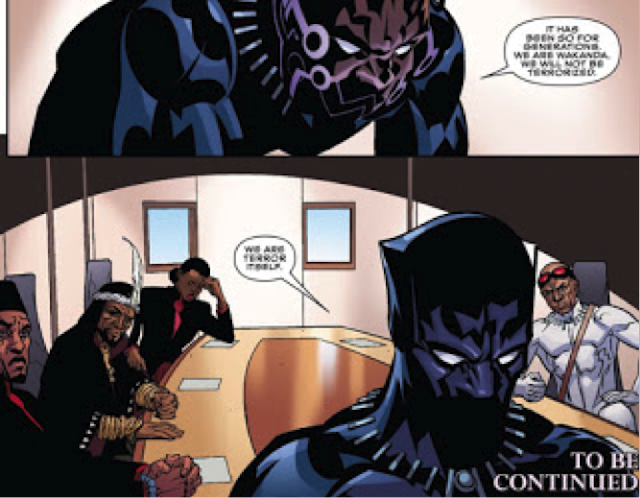 For an issue with not much action, this book still delivered. It gives us all the information we need to move forward, and keeps me wanting more background on the supporting characters. Since issue one, this book has the feel of a TV show, or a movie vibe, and that keeps me sticking around for more. The art was not as crisp as in other issues, but it was still really good and adds a lot to the overall feel of the book. I really can't imagine how this book would be with another artist right now; I hope that this team sticks around on Black Panther for a long time.

With this series I have the first two issues in print form and the last two in digital. I regret not getting the physical copies to complete my collection, so I may go pick them up or just wait for the trade. I actually think that it would read much better in one sitting, but even with that said, this is still one of the best books on the racks right now.