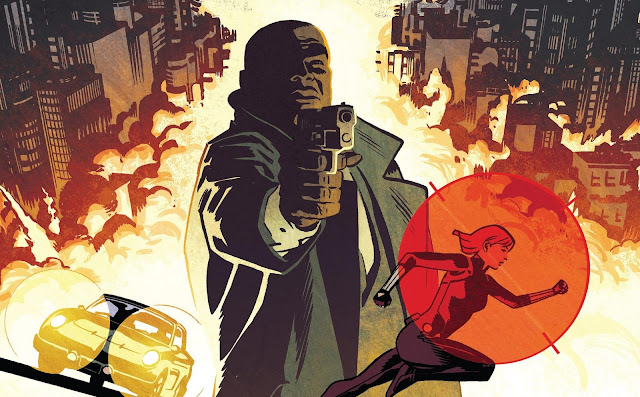 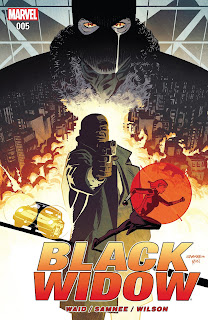 
Is it bad that I wish it was just pictures of Scarlett Johansson when I opened up this book? Nothing against our artist Chris Samnee, but come on, it’s ScarJo. Okay, I know that’s just wishful thinking. In all honesty, all I know of Black Widow’s history is what has been shown in the MCU. The credits page does a pretty good job of catching up anyone jumping on with this issue though, so if I can get an awesome spy story out of this book, then I’m happy.


Let me just start by pointing out that this could pass as a Jason Bourne movie adaptation, but instead of Matt Damon (or Jeremy Renner, but let’s not talk about Legacy), we get a hot redhead.

Natasha has stolen some files for our villain, Weeping Lion, which is a terrible name by the way. She is waiting to make the drop with one of Lion’s agents, but quickly discovers that she’s surrounded by SHIELD and Lion’s other men. She leads “Dmitri” into a parking garage to protect him, but more Lion agents are waiting and shoot him. Natasha tells Dmitri she knew he was SHIELD all along, because she’s Black Widow so why wouldn’t she know that? 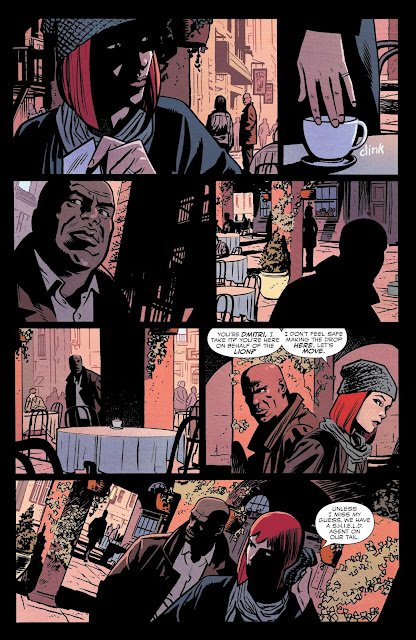 This is where the spy movie action really kicks in. It looks like they’re pinned down, but Black Widow has something up her sleeve—literally, she has a cool gadget, which I’m assuming can be used whenever she needs a key. Black Widow shows off her driving skills, evading gunfire for a while before driving through the wall of the fourth floor. But no worry, she grabs this Agent Dmitri and swings them out of the way and back inside.

By this time, Lion’s men have caught up. They put a gun to Dmitri’s head and demand that she hands over the files. He’s trying to convince her to walk away and prove that she isn’t a traitor after all. Put in a moral dilemma like this, Natasha decides it’s best to just hand over the files and save the agent’s life. This doesn’t save his life though, because the agent pulls the pin on a grenade and blows them all up. I have no idea how Black Widow doesn’t die, either from the explosion or from being blasted against a parked car, but she does indeed live. 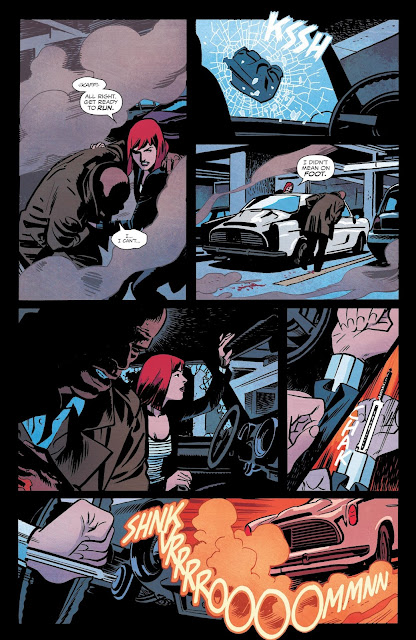 Back in the den, Weeping Lion prepares to broadcast Natasha’s “biggest, darkest secret” to the entire world. No, I have no idea what that secret is. Apparently it’s going to have a pretty big impact on Tony Stark, who is popping up all over the place recently.

Chris Samnee gives a very cinematic panel layout that looks pretty good. I wasn’t a big fan of the coloring, but other than that I was happy. There isn’t anything that blows me away, but there isn’t anything I hate about it either.

Chris Samnee and Mark Waid clearly know how to write a spy story, but I feel like I probably need to read the rest of the series to know exactly what’s going on. I am interested to see where this leads with the character that pops up at the end. If you’ve been reading and enjoying this series, definitely pick this up. If not, maybe wait until next month and jump on then.