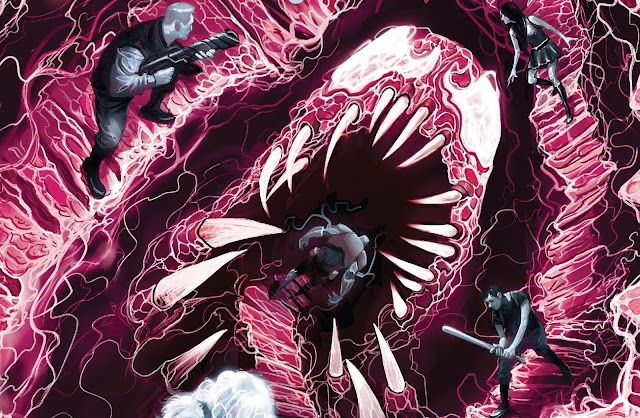 Losing Yourself In Your Work 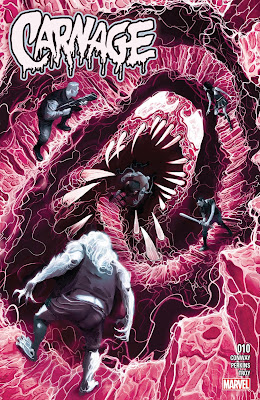 It's time to get back to our crazy Carnage story that combines the alien symbiote with the power of magic in strange ways I don't even fully understand yet....... but that could be because I've only recently jumped into this story and I'm not fully invested in it yet.  Yeah, that doesn't really scream confidence in my review for this issue, but I'll still try to do my best in relaying all the pertinent information for your Carnage lovin' asses.  In our previous issue we saw our Anti-Carnage Task Force catch up with the slimy psychopath, while he was aboard a cargo ship on his way to a mystical alter to unlock the full power of the Darkholm........ Yeah, this shit is crazy as hell.  Let's jump into this issue and see how our team fair now that they're surrounded by the ship's crew, who have been infected by Carnage's new power.  Let's check it out.

Our issue begins in a strange ass way in that we start in the future, a lot like we did in the previous issue, where we saw Clair Dixon talking to an unfortunate boater the team picked up, who accidentally picked up Carnage and who then blew her own boat up to not only escape the killer, but to destroy him as well, but the twist here is that when the girl tells the rest of the team that she talked to Claire, they all go white face and say that Claire Dixon is dead......... which leads us back to our story.  Yeah, it turns out that when Claire confronted Carnage at the cliffhanger in the previous issue, she didn't quite come out of the experience unscathed, but became a symbiote host herself, now known as Raze. 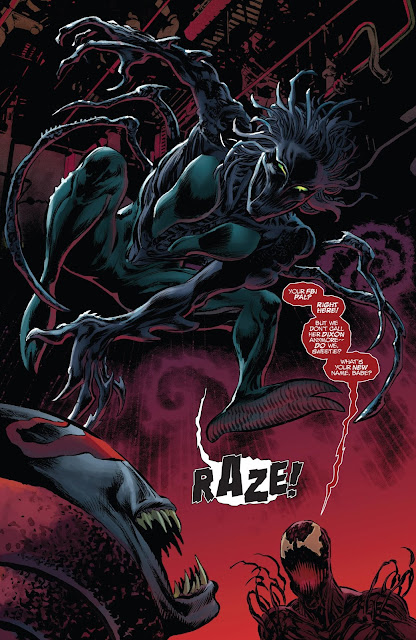 Besides for that huge reveal, we also have the rest of our team going balls to the wall trying to reach Claire, before they know she's a monster of course and to do that, we see John Jameson werewolf-ing the hell out and Eddie Brock getting his symbiote blocker deactivated so he can go full on Toxin........ which is a good thing because when it's revealed that Claire's now Raze, you kind of want a symbiote to take on another symbiote.  Really though, this issue besides for the reveal and the monster mash that goes on is just our team going through the ship and trying to stay alive by pumping as many bullets into the former crew of this ship as possible, now that they're pretty much Carnage zombies. 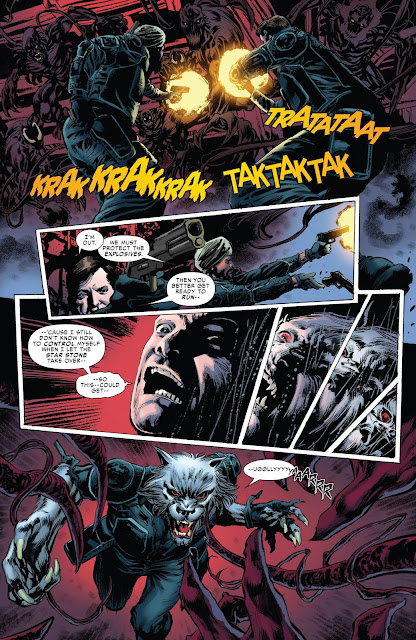 In the end, our Anti-Carnage Task Force plants explosives around the ship and make their way to a life boat, while Toxin tries to keep Raze and Carnage at bay........ and even though it looks like our team actually pull it off, since we know that this story is in the past, it kind of makes it a bit less satisfying that we know the ending before we even really get into the action.  We do leave this issue with finding out that Claire Dixon is believed to be dead, even though the castaway our team picked up claims she talked to her and with this belief, she's continuing to go with her team, but tucked away on the side of the ship as their journey to stop Carnage continues. 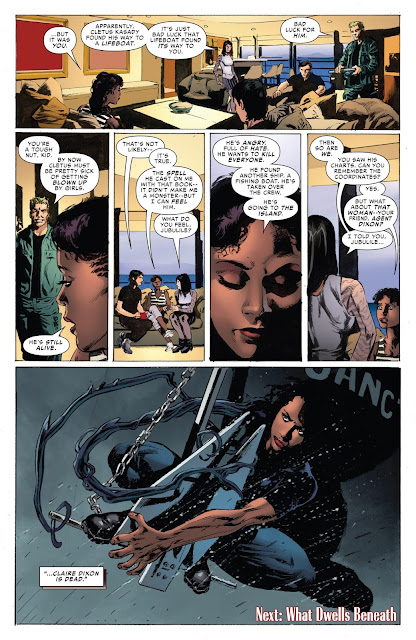 That's it for this issue of Carnage and I enjoyed this issue more than the last....... simply because it offered the same thing, while giving us everything we wanted from the last issue, plus adding a new spin to the tale by making Claire Dixon a symbiote host herself.  The thing that I find most unfortunate about this issue and really just Carnage on the open water is that we're stuck in the drab environment of a cargo ship...... or whatever kind of ship it was and it's just not very exciting, especially since most of the Anti-Carnage Task Force, who aren't monsters don't really have anything to do in the story besides for shooting their guns at anything that moves.  So yeah, we got a few more things this issue that made it a half decent read, I just hope that our team get to their destination in the next issue so we can get back to having something to look at besides darkness, catwalks and pipes.

Carnage this issue does take a step in the right direction when it comes to action and showing off what the super powered members of the Anti-Carnage Task Force can do, but since we continue to be in a drab, dark environment, the art doesn't seem to shine as much as I would have liked.  I do look forward to where this series is going though and with the added reveal here, it does change up the dynamic of the book.