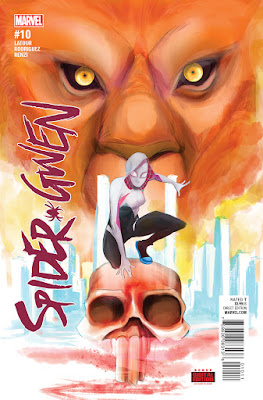 *NON-SPOILERS AND SCORE AT THE BOTTOM*

It's that time of the month again. NO NOT THAT!! It's that time to review my Spidery book of choice! Spider Gwen is, hands down, the best SpiderVerse book out right now. Spidey is just a little bit behind, but that is a great book as well. Okay so let's pick up were we left off: Last issue, Frank Castle put his grubby paws on Gwen and she knocked him the hell out. Wanna know what happens next? Read on!

Issue ten picks up with that punk Frank running to Kraven for help since he can't handle Gwen on his own. Frank gives him his spiel on how they were both predators and that they need to serve "their master.” 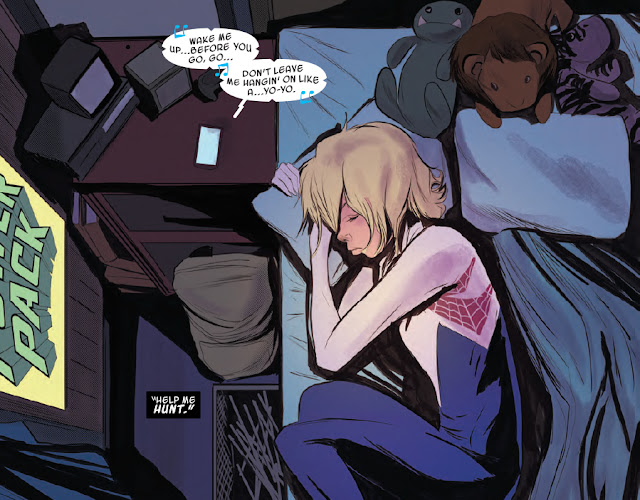 We then cut to what has to be the best alarm ever: “Wake Me Up Before You Go Go” by Wham! Gwen wakes up and realizes that she is at her dad's house. I like the Power Pack poster on her wall and the shirt as well. She vaguely remembers using her powers after beating up Frank Castle. She stopped a thug from robbing a delivery boy pretty easily, and she and the delivery boy were off on their way.

She hears her dad and is about to take off before he finds out that she is Spider-Gwen, but she spies someone on the roof across the street (who we can assume is Kraven since he is wearing Cheetah-skin pants.) Gwen tells her dad that her powers were taken away, and she needs to use a device and serum power ups to simulate her powers. Her explanation and his reaction made me think about Jessie and Zack from that Saved By the Bell episode about caffeine pills.
Gwen tells her dad that Frank Castle knows her secret, and he advises that she will need her powers to go up against him. Then we see a butt-load of snakes released from a bag, Jake the Snake style. They swarm all over the house and then Captain Stacy gets punched by a giant orangutan, which leaves and comes back with a freakin' puma! 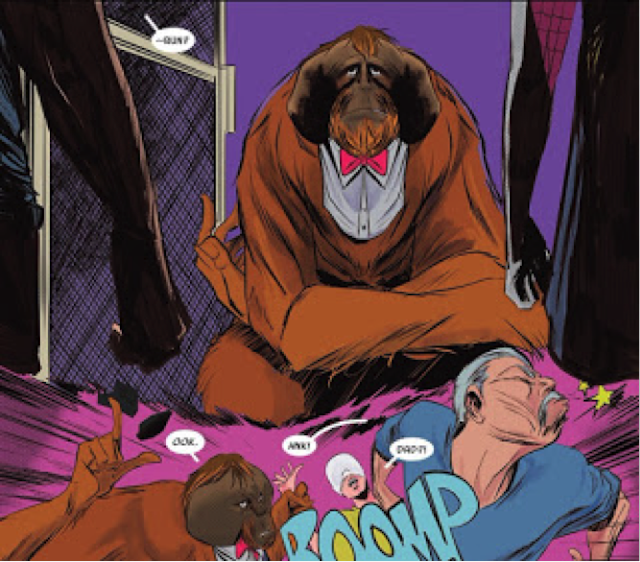 Talk about bad timing, May Parker comes over with a pot roast for Captain Stacy and winds up right between the puma and Gwen. May tosses the pot roast and the puma pounces on hit and goes to town. May gets a water hose—yup a freakin' water hose—to hose down the kitty, and as Gwen goes to get her serum, that bastard Kraven destroys the device that simulates her powers. 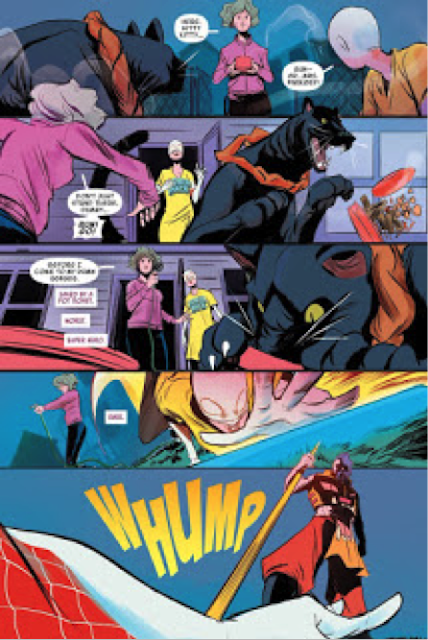 Captain Stacy goes for his gun and his phone, but both items are surrounded by snakes. Is it a coincidence or are these smart-ass snakes?! And where is Sam Jackson when you need him?
Just as the puma finishes his lunch, Gwen needs her serum so badly that she’s shaking. The puma leaps at her and she actually knocks it out on her own. Kraven gets her in a full nelson and is impressed with her strength, so she must still be stronger than average even without her powers to knock out a puma and to have Kraven mention it here.

Frank Castle is taking pictures the whole time, to use as evidence that Gwen has been the Spiderwoman all along, then Captain Stacy catches him off guard: he destroys Frank’s camera and knocks him out. He tells Gwen that he’s called the cops and wants her to split. Captain Stacy will take the rap for what went down, and any evidence against her is destroyed. Gwen refuses to let him stay, so she knocks him out and splits—meanwhile, Kraven is holding on to a vial of serum. Now we have to worry about Kraven getting power from that serum!

As usual the writing and art are always top notch. Just like on Black Panther, I hope this team will be working together for a long time. I would recommend this book to anyone who is a fan of the SpiderVerse books, but does not want to be caught up in a ton of crossovers. The Spider-Woman crossover was not long at all, and it was just a small bump in the road compared to books like X-Men that I’ve refused to read for the past five years, even though I love the characters.

This book was a great step moving forward, especially after the annual that I did not really care for. This is my Marvel book of the week foe sure, I still need to read the newest Lobster Johnson before I make my decision for the top book of this week. Be sure to look for the full review of that series in the next few days.