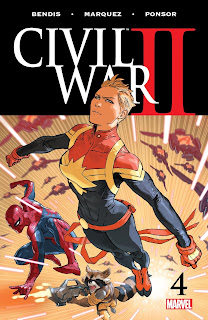 We’ve officially reached the halfway point of Civil War and I’m starting to wonder why this title wasn’t given a different name altogether.  Other than being released around the same time as its big budget movie counterpart, these two properties (comic book vs movie) have had nothing in common.  So far the charm, action, and twists found on the big screen have failed to translate to the comic pages.  So, let’s see if we finally get the summer popcorn action we’ve been craving in our Marvel comics or if we’ll continue to tread water until this event sinks into oblivion.


This issues kicks off as Captain Marvel, currently the most unlikable person in comics, returns to the Triskelion to find She-Hulk awake from her coma.  Carol recaps to She-Hulk everything that has occurred since her injuries at the hands of Thanos including her cousin Bruce Banner’s death and the answer to the first of our cliffhangers ... Hawkeye Walks. This news leads to a pissed off looking She-Hulk who seems to have added some kick ass glowing green scars from her near death journey. 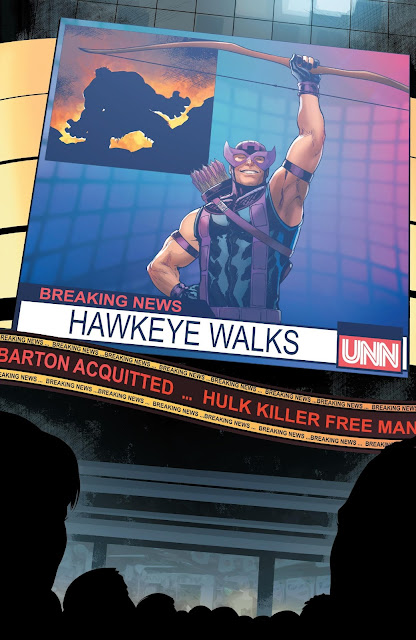 The second act of the book sheds light into part two of our cliffhanger from last issue where Friday, Tony Starks A.I., stated she had discovered how Ulysses' powers work. We’re immediately treated to a Tony Stark speech we find being intercut with Captain Marvel taking action on yet another Ulysses vision.  As Tony’s speech continues, we find out Ulysses was actually incorrect with his prediction this time but Captain Marvel still moves forward with an arrest.  As we flashback to the conversation, we see Tony has gone to Captain America (and what looks to be a majority of the old Illuminati with Captain Marvel) for advice because last time he took a stance this powerful it led to the first Civil War. 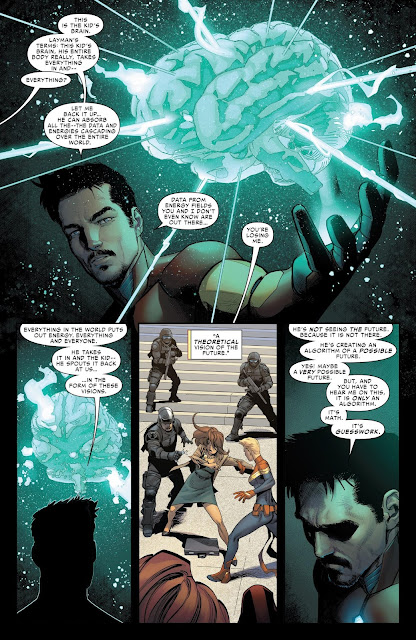 In a bombshell, verified and backed by Beast, Tony reveals that Ulysses visions are only accurate up to TEN PERCENT of the time.  Listen, I’m no math guy over here but that doesn’t sound all too positive. Despite this overwhelming evidence to the contrary, Captain Marvel just flat out refuses to budge from her stance on using Ulysses to fight “possible threats”. At this point, I didn’t think it was possible for Captain Marvel to look any worse but then I continued reading this comic.
The Captain Marvel shit show continues back at the Triskelion when we see her refusing to let the lady she wrongly arrested earlier leave. Despite the fact there is no evidence against her, other than Ulysses vision to prove she did wrong, Carol continues to question this poor lady and even threatens indefinite imprisonment unless she confesses.  As Captain Marvel turns to briefly leave the area, we see a BAMF cloud come into the room. The accused prisoner disappears with Nightcrawler and is quickly tracked to the rooftop by Carol and her team inside. 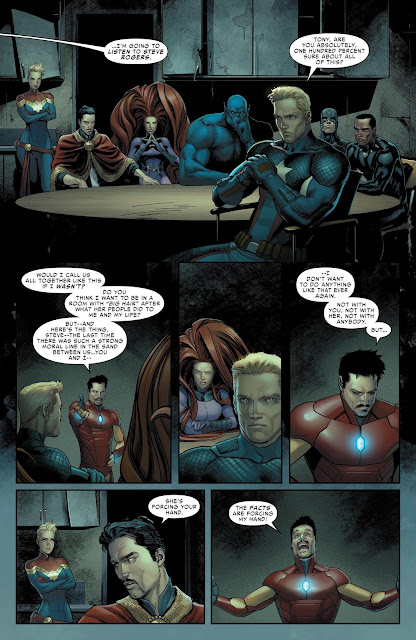 As the group inside reach the rooftop we see a gaggle of heroes awaiting lead by Tony Stark.  A few words are exchanged between Tony and Captain Marvel before Carol calls for her own trump card. Our issue ends on a cliffhanger involving the Guardians of the Galaxy as they respond to Carol's call and attack the Iron Man lead intruders.
What made Civil War I so exciting was you could see both sides of the argument and understand the points made by both Iron Man and Captain America and the characters that followed them. This allowed main and supporting characters to change alliances and build towards an eventual climax. The way tension is built in this story allows for none of the alliance changes or anything resembling further character development. There will be no well thought out change of heart here like Peter Parker in the first event without coming off as extremely forced at this point unless Bendis has a rabbit in his hat he's hiding for a rainy day. To make matters even worse, it seems like heroes are just assigned sides at the end without any forethought whatsoever. For example why would any X-Men take Captain Marvel’s side after all the time travel and time line changing shit they’ve been though? Some of this just isn’t well thought out.

Bits and Pieces:
This event has struggled to find its footing since the beginning of the story and it only continues to do so here.  Captain Marvel, despite being literally proven wrong, basically goes villain here for the sake of moving the rest of this story forward. The only saving grace of this issue is the art team of David Marquez and Marko Djurdjevic whose character drawings and colors will stand the test of time. Other than that this is a very one sided Civil War. Think of it as basically the Marvel equivalent of the Turkish military trying to overthrow their government.
4.5/10
Posted by Jim Werner