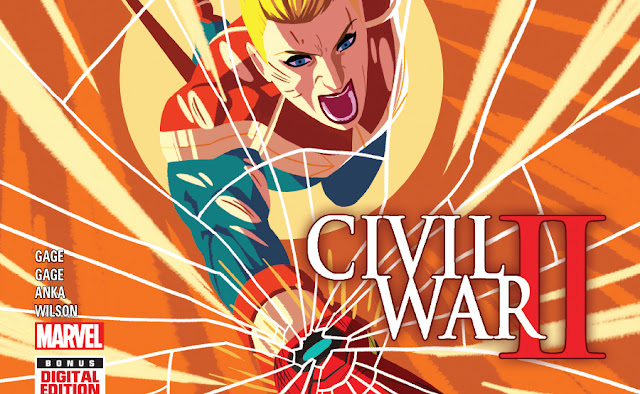 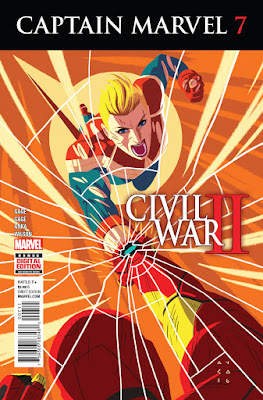 *Non Spoiler and Score At The Bottom*

*Being a tie-in to the Civil War II crossover event, this issue and review may have SPOILERS for Civil War II*

Light your torches and sharpening your pitchforks because I am reviewing Captain Marvel AGAIN! Insert an appropriate amount of maniacal laughter here before continuing. When I last took a gander at this book, I gave it a mediocre score and the Captain Marvel fans came out of the woodwork. Some simply wanted to voice their disagreement, others wanted to put all their anger on the internet. I felt that the issue was kind of a throwaway and being a part of the crossover event really robbed it of all the stakes it could have. Others felt that it was actually handled very well and one commenter even claimed that issue 6 would be looked back on as one of the most important issues of Captain Marvel because it would set up what would come next. So, would the previous issue set up one of the biggest stories in Captain Marvel history? Would it fall flat and be a complete waste of our time? Or will it fall somewhere in the middle? Let’s jump in and find out.

This issue opens with the board of Alpha Flight having a trial of Captain Marvel. They accuse her of withholding crucial information from the board and thus she has committed treason. Carol decides to stand without a lawyer as She-Hulk is her lawyer and is unable to be there. Carol defends herself by speaking about the things she has been able to take care of due to the visions of Ulysses, including the capture of Thanos. They then address the kidnapping of Ulysses by Tony Stark and the result that had on Ulysses. The comic cuts away in order to show a story about how Ulysses was hiding the fact that he was having visions. Medusa blames Stark for getting into Ulysses head and making him afraid of his gifts so Carol decides that she is going to talk with him. 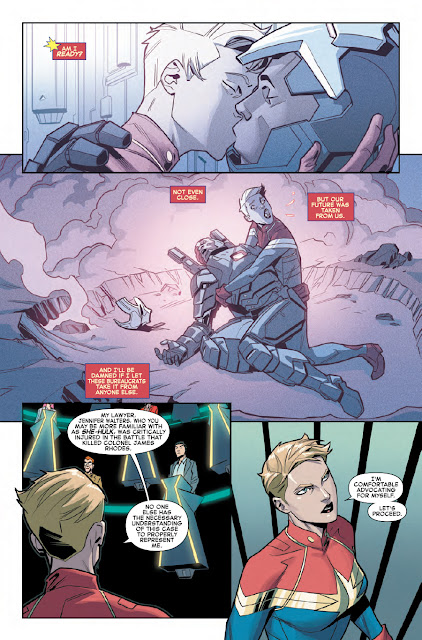 At this point we get a mistake in the issue. I don’t know which part of the creative team is to blame but apparently Ulysses is going by the name Carol Danvers and believes he is Captain Marvel and Carol is really into mediation. I had to read it several times because I couldn’t believe that they had actually mixed up the dialogue bubbles, but they certainly did. Moving on, Carol talks with Ulysses about James Rhodes and how she was in love with him and she misses him very much. Ulysses feels guilty about it but Carol tells him that he shouldn’t. Because of him, so many people were able to walk away from that attack with their lives. Is it a tragedy that War Machine died? Yes, but ultimately they saved so many lives and that is something that Rhodey would have wanted to do no matter what.

Having gotten through to Ulysses, Carol asks him about his latest vision and he tells her about it.
Back to the trial, Carol discusses how Ulysses saw Minerva and they were able to stop her. The comic flashes back to this when Minerva is found by Captain Marvel and the rest of Alpha Flight. They are able to quickly take her down despite her transformation. They were able to capture her with no casualties. The scene returns to the trial where Carol pleads with the board to continue her work even if they choose to remove Carol from the position of leader. She is called back in to confirm that the board will drop all of her charges and that she is the clear choice to lead them going forward. They also promise that she will have all the resources that she needs. With her position secure, Carol moves forward with her plans regarding Ulysses. This is where the issue leaves us. 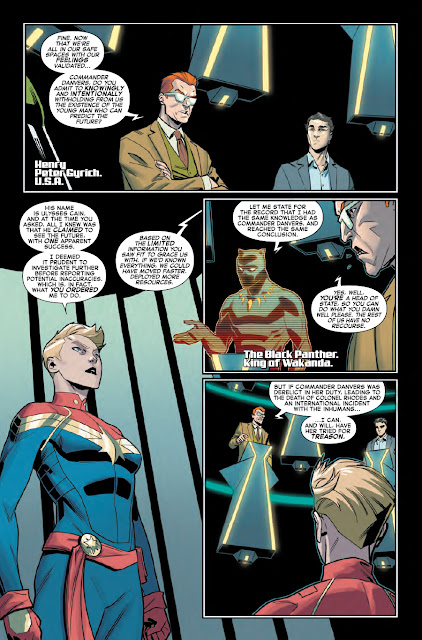 So how did the issue feel for everyone? Was it everything you told me it was going to be? Does it raise the value of the previous issue? No. I’m sorry, but this issue isn’t adding anything new or special to this book or this crossover. Now there are a few things that are good and I do want to give credit where credit is due. Aside from the major mistake in dialogue, (I mean seriously, how many people did that page have to go through and none of them saw a problem?) the scene where Carol and Ulysses talk is really nice. It’s heartfelt, it’s relevant, and it’s giving me something I hadn’t seen before. In addition, I’m a really big fan of the art for this issue. However, the rest of the issue is really a stretch for me. Minerva was a throwaway villain in the last issue that was still at large and this time she’s a throwaway villain who is reintroduced, fought, and defeated in only six pages. The rest of the issue is a board (emphasis on the BORED) meeting in which people are willing to charge Carol with treason because she didn’t tell them about Ulysses. Her reasoning seems solid to me but they still make a big deal about it. Honestly, it’s like the Star Wars prequels when there’s huge chunks of time spent in The Senate, arguing about intergalactic trade law. But hey, I guess some people really like that stuff.

Overall, issue 7 of Captain Marvel is not going to have massive reactions throughout the universe. It’s not going to make the last issue into something amazing. There is one scene that is really great and well made, but then there is a massive fuck up when it comes to the dialogue. The rest is a boring board meeting and a scene of action where they beat the crap out of a throwaway villain. At least the art is really amazing to look at. Regular fans of Weird Science DC Comic know the significance of the following score.