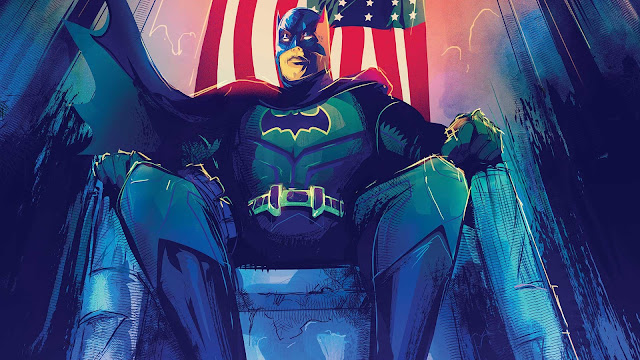 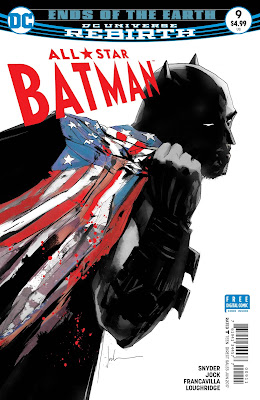 We started in the frozen tundra, then went to the arid sands and even played in the landscape of the mind, but all those adventures led up to this one, where Batman finally finds the person behind the plague that is spreading over the United States.  It's been a weird ride, where things didn't always add up to me, but the storytelling was at least interesting and after having so many superhero titles thrown at us week after week, where you can pretty much tell that the same stories are being told again and again, here we come upon something special and hopefully with this final issue to the arc we tie everything up in a nice little bow and everything is made clearer for it.  Let's jump into this issue and see who is the villain that led Batman all across the country and hopefully find out what Duke's name is finally going to be.  Let's check it out.

Our issue begins with Batman racing towards the Washington Monument, where he's being chased by the agents of the Blackhawks, who plan on gunning him down before he ever reaches his destination.  It's in that monument that we find the mastermind behind this whole plot to spread disease and death throughout the country and after saying it like it seems really obvious that Ra's Al Ghul was the perpetrator the whole time, but to my surprise it seems that the three issues that came before don't really jive with what I originally believed.  Yeah, it seems that Ra's used the camo tech that the Blackhawks had to get Mr. Freeze into the Alaskan facility, he laced Ivy's cure on the bombs so that the bacteria would be immune to it and he's used Mad Hatter's tech to takeover power stations all over the world to begin his mass extermination so that in the end the world would be saved from mankind.............. Yeah, Ra's has another explanation about how he sent Batman to all those locations so that he can see the three main ways the world could end, but Mad Hatter's issue doesn't really make much sense to me with all that. 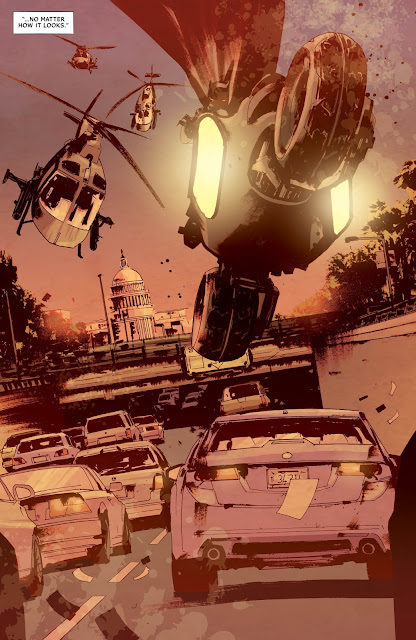 Anyway, Batman seems to be shot down before he could reach Ra's, but all that was a ruse setup with the help of Alfred and Catwoman so that our hero could actually enter the Monument as Bruce Wayne and get the upper hand on Ra's, which at first........ yeah, it doesn't look too good.  Not only do we believe that Ra's used his new tech to blow up power stations all over the world, but it also looks like he shot our hero in the head as well and completely won the day.  Too bad that Batman was ready for all this and used the villains from the past three issues specialties to whip together a concoction that made Ra's believe that he had done all this. 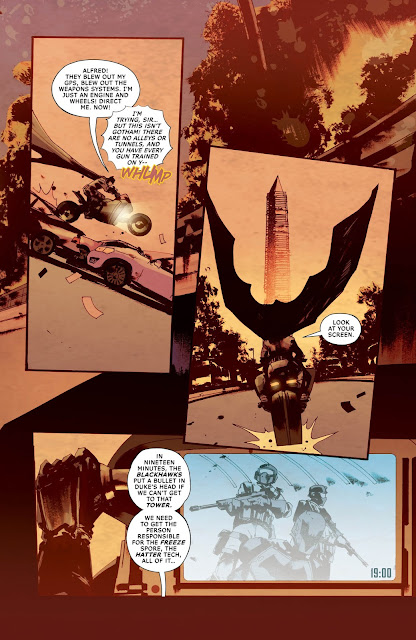 In the end, Batman stopped the signal from destroying the targeted facilities and saved Duke from his faux-Blackhawks captors, but Ra's was able to get away and we end this tale with the bacteria that was spreading all across the country still out there and nothing really being done about it.  As our issue closes, we move on to our back-up, where Duke is taking on Darryl, who if you remember from the Super Heavy story was the original Mr. Bloom.  Yeah, there really isn't much to this besides for Darryl affecting Duke and Batman finally finding out how to solve Riddler's puzzle.  Where I thought we'd finally get Duke's name turns out to be only a stepping stone to the Dark Days story coming this summer. 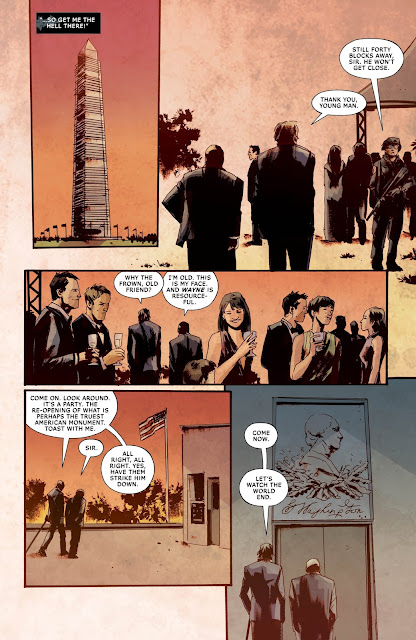 That's it for this issue of All-Star Batman and for the most part.......except for the backup, I enjoyed it.  Yeah, I had some issues with the explanation about how all of the previous issues of this arc came together in Ra's eyes and how the story at the end seemed to turn into something else, leaving the bacteria that was threatening the country still out and about and killing folks left and right, but the parts with Ra's and Bruce and their discussion about everything actually came off really cool.  Jock's art, which I'm normally not really a fan of came off really great here and I loved the shadowy political tone of it all.  I only wish that the entirety of the arc came together better because now that it's all said and done, I don't know what the point of all of this was besides for featuring a different villain for each issue and having some interesting art to accompany it.

The ends don't justify the means with this one because while I enjoyed a large chunk of this issue and the art that accompanied it, I have trouble understanding what the point of everything we dealt with in this arc was.  Yeah, there were callbacks to the last three issues and explanations about them, but they don't really pan out for me and the parts of the story that I enjoyed the most had nothing to do with the whole of this arc..........and the backup to this issue was really disappointing for what it seemed we were leading to.