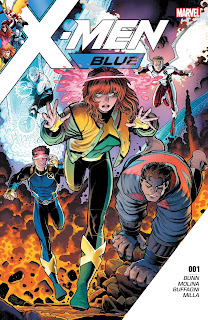 Here we are, our time displaced team is back together, Jean Grey as leader. Their mission, take down Black Tom, but Black Tom has a trick up his sleeve…

So I really enjoy the way they introduced each character with their name, Alias and power set… it makes it easier for the new readers and for those of us that know these characters it's a nice refresher. Now, when did D.C. characters cross over to the Marvel Universe? Is it just me or does Black Tom’s costume look a whole lot like Batman Beyond?

Our Mutants go to work, quickly dealing with Black Tom, unfortunately for our team Tom isn't alone, there is also Juggernaut, and he's not happy.  Bobby goes right to work trying to freeze him but all he does is make him pissed at Scott. He blames Scott for the death of Xavier, and is going to get his revenge. 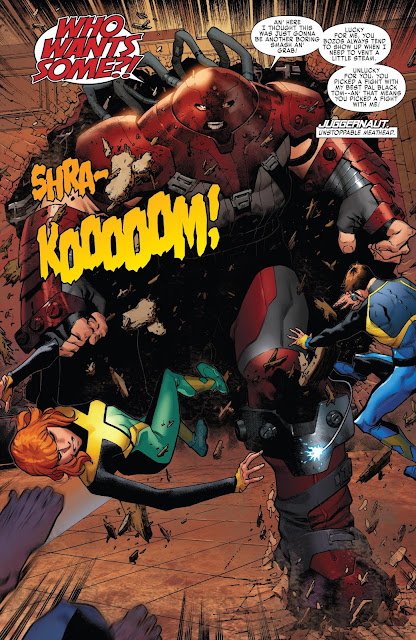 Never mind that this Scott is a teen and the Scott of this current time is dead. No matter what they do, Juggernaut gets back up and keeps coming at them. Finally, Beast uses some magic to send him away. Now, this isn't a side of Beast I've seen, nevertheless it's a side of Beast I like. Even after he joked about it while in a screaming match with Scott. 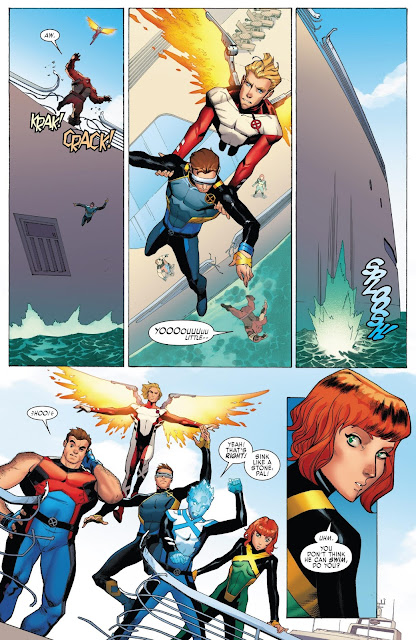 It's seems like a lot of the issues we have this book are with Scott wanting to be the leader and still thinking he is in charge.  This part of the book comes to a close with the team detailing their mission to Magneto, who has plans to use the team to go after threats against Mutant kind. Meanwhile we have a surprise ending with what looks to be Wolverine's son from the Ultimate Universe, will he join the young team of X-Men or will he be a problem they have to face in the future?


This was a pleasant read and whether you've been reading X-men most of your life or this happens to be the first book you've picked up, the writing team has made this a book anyone can understand. So, if you're wanting a good X-men story this is the book for you.