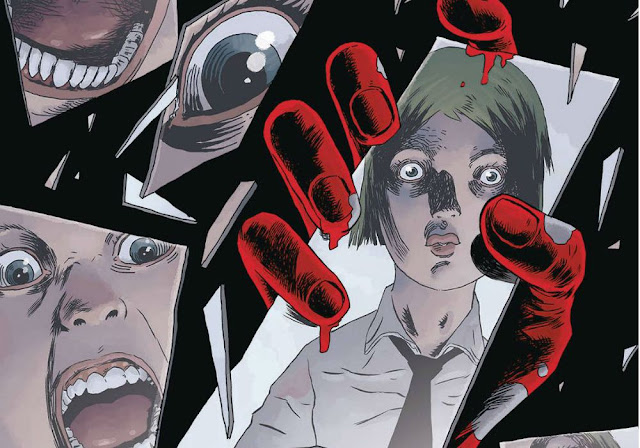 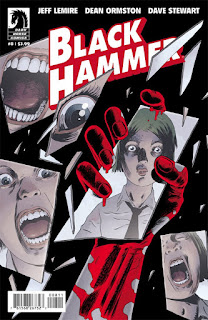 After some disappointment with the annual and our first issue after it, I’m ready and happy to jump into a new arc in Black Hammer. With Lucy wasting no time before getting to work on the mysteries of Rocktown, I can only hope that the mysteries underlying Black Hammer starts to finally get some light shed on them.


We first start the issue with Gail in a flashback as she meets with the Golden Family where she will announce her retirement from being a superhero. It doesn’t go unnoticed that this could possibly be the first the Golden Family or the audience have ever seen Gail happy. As she notes herself the world has gone to hell and she’s tired of this shit. So she sets off to live a real life as she retires.

What else would we have after this other than finding Gail passed out on the bar that she has apparently broken into. Before the barkeep can make a call to Abe she flies off as we shift to Lucy anxiously waiting for the local Library to open. We get some diary entries as she tells us she refuses to just accept the town of Rockwood as her new home. She notes that most of the others have either seemed to give up on their questioning or are actually happy where they are currently. With the Library finally open Lucy sets off on her mission to learn more of her current surroundings only to be met by pretty strange findings. 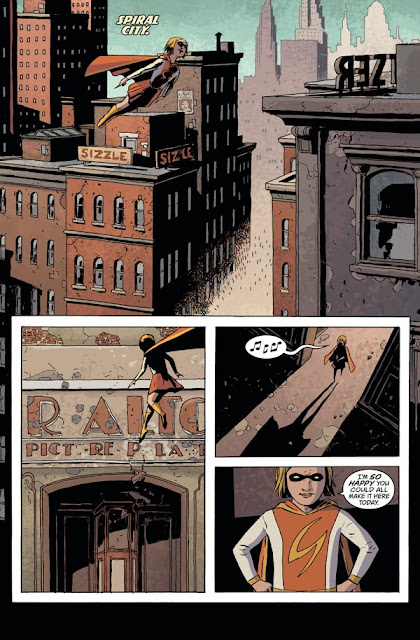 We get a small glimpse of Barbalien being happy with his new found enjoyment in the church going community before we get another glimpse of Gail as she tries once again to reverse her childlike appearance with the magic phrase Zafram. With no results we once again jump into another flashback immediately picking up where the previous one left off. Gail still happy with her exclamation of retirement is checking in with one of her long time villains. It seems this villain has long reversed on their evil doings and has gone straight, and with Gail now retiring she wishes to catch up on some long brewing feelings between the two. 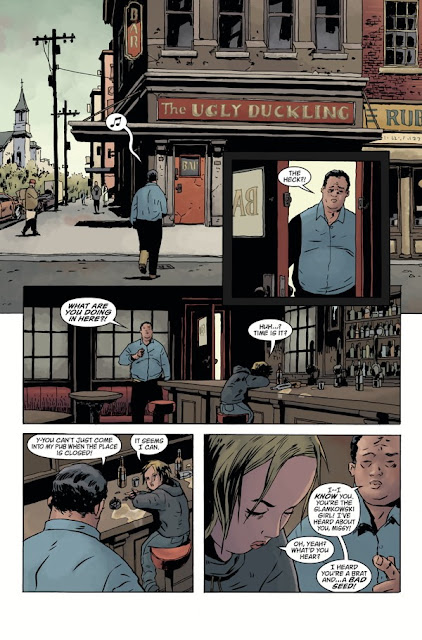 Our final scene is between Lucy and Talky-walkie as they possibly think of a way to get one of Talky’s probes outside of the perimeter only for it to eventually be obstructed by another.

I have to say it’s an absolute joy to get back to what I have come to expect from the series. Absolute and utter sadness. Even when characters are happy it comes with a twinge of bitter sweetness and sadness. We get more emotional sadness from Gail as we just learn more and more what she left behind and find out that it’s not just a matter of being stuck in her childlike body. We get the story advancing and mystery building but even that comes with a hint of sadness as Lucy doesn’t even seem to remember how she got to Rockwood in the first place. Then, just when there is a sliver of hope, it’s absolutely fleeting and slips away. Maybe I’m a bit sadistic but I absolutely love the sadness and morose emotion that this book elicits.

Bits and Pieces:
With the story progressing it seems Black Hammer moves right back into the grooves of emotion I expect it to inhabit. Black Hammer is probably not for everyone, but if you enjoy the sadness and heartache that I’ve come to expect from the series this issue definitely kicks off the new arc with a kick to emotions.
9/10
Posted by Unknown