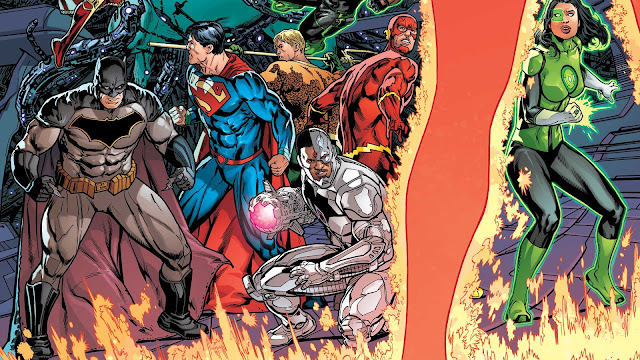 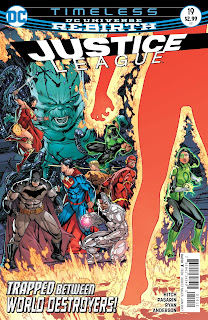 I am not going to sugar coat anything here...I hate what Bryan Hitch has done to the Justice League. This book is my least favorite of all the Rebirth titles (and I read every single one) and I would gladly give it up for someone else to review, but nobody wants it!  Just thinking how far this book has fallen in less than a year is heartbreaking and I really can't see it getting any better until someone at DC breaks whatever spell Hitch has on them and sends him packing.  However, that's not why I'm here, I am here to review the latest chapter in the Timeless story and I promise that as always, I am going in with a clear and open mind.  I know that's hard to believe after this introduction, but it is 100% true.  So, how was this issue?  Let's find out...


The issue opens with Batman, Superman and Jane stopping Tempus, but now heading to the real threat...Molly.  They don't know her and she rectifies this by yelling out her exact plan to wipe superbeings from existence. I'm not sure why she would do this, but it gets everyone up to speed at least.

She explains how meta humans will destroy existence, but it's all a bit too vague for my liking and that continues with the whole "something else is coming" bit.  For someone willing to kill so many, I would like to think she at least thought she knew exactly why. 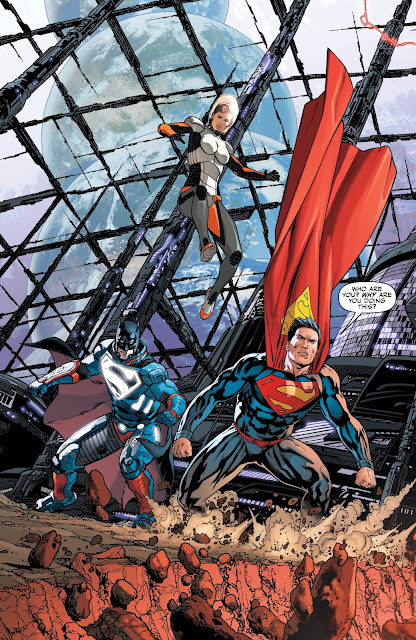 At least Batman found the monologuing as ridiculous as me, but even that wink wink from Hitch irritated me.  These characters haven't felt right since the beginning of Rebirth and having Batman say that villain monologuing gives them time to come up with a plan...without coming up with a plan is just ridiculous.

Batman does promise to find Lois and Jon and goes off to do so as Vincent and Jane investigate Tempus.  We get a repeat of what Superman told us last issue about the Hologram and then Vincent suddenly becomes a cutter.  Okay...

We then get the rest of the League throughout time suddenly able to speak to each other "because" and all of them are confused at what's going on.  Join the club!  They then all get a message from Tempus telling them about Molly...that is interrupted by Vincent because, you know...his blood!  He tells them to destroy all of Tempus' machines, but they will probably be stranded in the time they are currently in.  Before being kicked out of the system, Vincent left some 'mind bombs" and seriously, I think one got me right where it hurts! 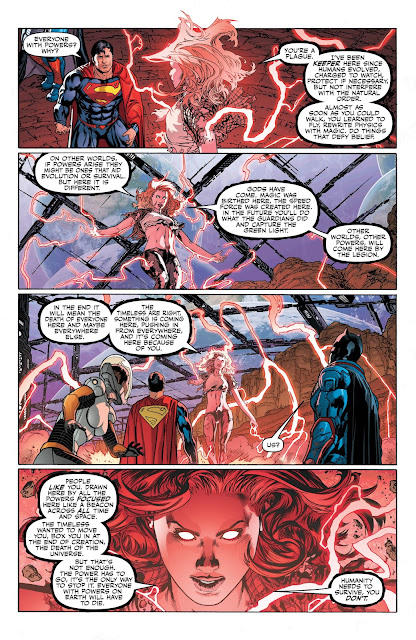 We then get our heroes doing their duty and destroying the machines, but it's not very epic and I'm not sure why Hitch keeps repeating himself each and every issue.  In this part, he has Cyborg once again say that if he messes up, he will suck the entire planet into a boom tube...it was bullshit the first time, why repeat it???

Then Molly just declares she has lost connection to the machines and we once again have a big moment fizzle out without any real payoff.  Of course she may have enough power to at least kill Superman...until she doesn't and the Justice League unite to save the day.  Yea, there is an interesting bit with Vincent that might pay off later, but this Timeless story just falls flat on it's face instead of sticking even a shitty ending.  Oh yea, Molly says it's only the beginning and they will all be sorry.  FUCK YOU!!! 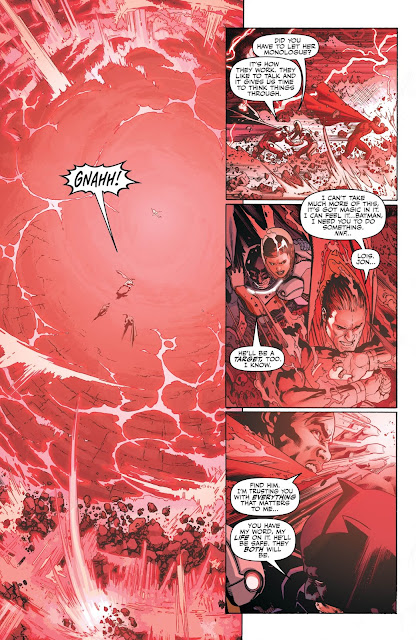 Way to go!  We get another non ending to a story that was convoluted from the very start and I want to just strangle someone.  This issue did nothing but solidify that this is easily the worst book in Rebirth and possibly the worst run of Justice League ever!  Can we at least get one actual ending to one actual story?  Is that too much to ask???  The storytelling, dialogue and characterizations in this book are laughable and I really have no clue why this is allowed to continue.  WHY?!?!?

I did like the art by Fernando Pasarin.  I wish I had more to say about it, but I really don't want anyone getting any sort of idea that I enjoyed this issue one bit so I will just stop at that.

I hated this issue.  I hate this book.  We get another non-ending to a story that made little to no sense and had no payoff whatsoever.  Avoid this book like the plague it is.