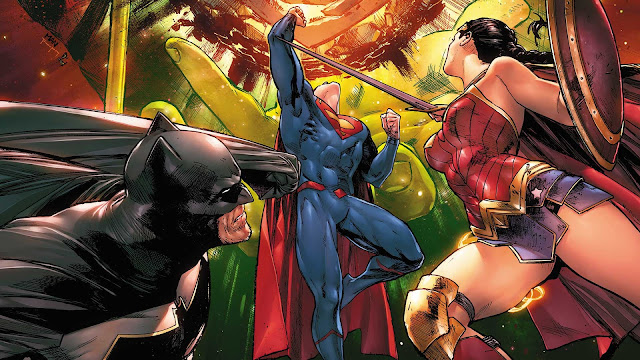 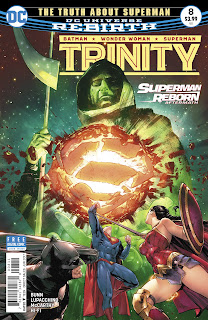 This book has been one of my biggest disappointments of Rebirth and that is only partly because of how much I was looking forward to it.  While the art has been consistently stellar, the stories have not been and having this be a Superman Reborn Aftermath issue doesn't bode well for that changing this month.  The Aftermath issues have all had the problem of not being allowed to do too much...just enough to piss me off.  That's right, they are all made for me and only me!  Well, at least that's what I keep telling myself.  So, does Cullen Bunn give me a treat and buck the trend?  Let's find out...

The issue opens with a beautiful day in Metropolis and I say that because it's in the narration, but also because the art is fantastic.  Again, that has never been a problem with this book, but I love me some Emanuela Lupacchino art anytime it pops up.

As for the story...we suddenly get a fight between old and new (52) Superman and it's a battle to see which one is remembered or known or something else that I'm not sure of and it's also a dream.  A fucking dream!  Is there a worst kind of plot devise when you desperately want answers?  Nope! 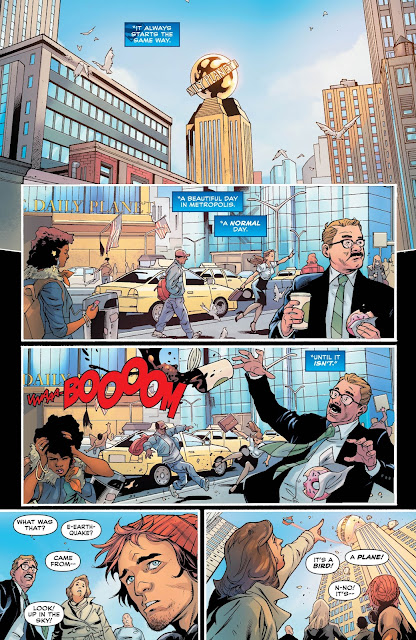 Basically, this issue goes back and forth between Superman's dreams and him explaining them to Batman and Wonder Woman and while we get a few fragments of information, they seem to go against what we already have been told.

That's bad enough, but the dialogue between the Trinity may be worse.  Batman cracks jokes while Wonder Woman has to get her obligatory mention of the "Truth" story and even if this one is more subtle than most, it still such a tired reference.  However, nothing compares to Batman saying that the Big Bad behind Superman's changing reality is now "Public Enemy Number One--With a Bullet." With a Bullet?!?  We are supposed to believe that's something Batman would ever say?!?  Bullshit!

So, what about those dreams?  Well, Superman tells Batman and Wonder Woman that his dreams are one of the only things making him remember that his life and reality has been messed with. He's also not sure if he is the only one this has happened to, but he has seen the evidence of the Multiverse and knows there is big trouble coming. 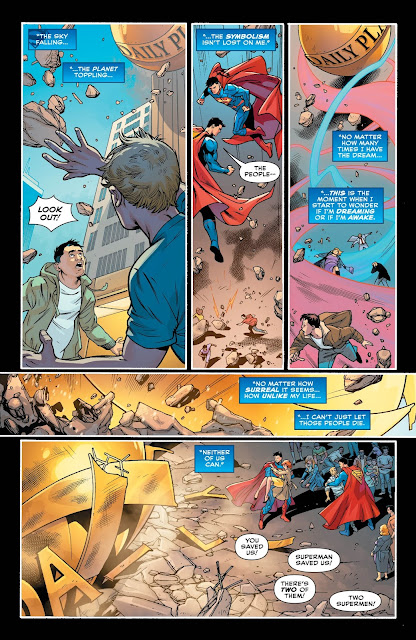 Batman makes them all promise not to tell anyone else about this and Superman says besides Jon and Lois, nobody knows.  The first problem I have with this is WHY?  Batman says it could tear the League apart and Wonder Woman agrees, but...WHY???  The explanation of everyone being "consumed by the possibilities" is vague and ridiculous.  It just seems like an easy way out.

Worse than that, though, is the fact that Superman has already told Supergirl, Kong Keenan and probably everyone else who would listen.  Seriously, this part made me wish that Superman was standing there with his fingers crossed behind his back as he agreed with Batman.

The issue ends with a non cliffhanger of Mr. Oz watching the Trinity on his big monitor and I really want to know how he gets all these video feeds from.  He obviously has a direct line to the Fortress of Solitude now...he must have some kick ass jail broken Fire Stick or something us common folk haven't even heard of yet. 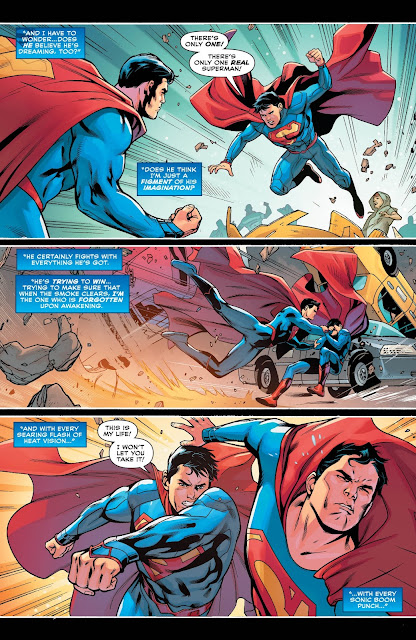 Yea, this issue was complete nonsense and I don't blame Cullen Bunn.  He had his hands tied here and tried to put something together with what seemed like little to no information of what others had also been doing.  That said, I thought the dialogue was way off and the Trinity felt stiff and wooden as if they didn't even want to be in this issue themselves.

I already said it, but Emanuela Lupacchino's art was outstanding and while I don't think it's worth the price of admission alone, it's damn near close.

Trinity #8 is another unnecessary Superman Reborn Aftermath issue that confuses more than answers.  It's all a dream, however, but besides the art, it's actually a bit of a nightmare.  Questionable dialogue and poor characterizations are just two more reasons to leave it on the shelf and wait until next month's issue gets back to the series proper.