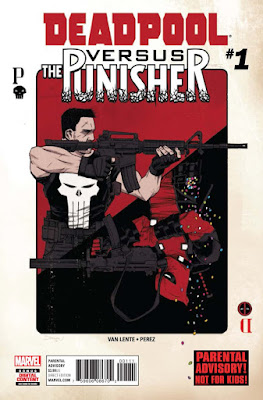 After dealing with some rather different Deadpool miniseries, Marvel has decided to once again milk it’s cash cow Deadpool for another five issue miniseries. At least this time we are getting something that most people can be excited about. Deadpool vs. Punisher sounds like an awesome series (at least it will bring in a bigger audience than Deadpool the Duck) and I’m actually really looking forward to it. Granted, when it comes down to it, Deadpool has superpowers and Frank Castle doesn’t. It’s a bit of a one-sided match on paper but The Punisher has a tendency to overcome nearly impossible odds. I also don’t know a whole lot about this creative team but I’m willing to give them a real chance. So let’s stop talking about it and just dive right in instead.

We begin at an underground bar with some dialogue from Frank Castle. This bar is a place where villains and criminals come to watch the news coverage of different fights between not only heroes and villains but heroes and other heroes as well. We see various customers until we finally get to the club’s owner. He brags and talks himself up a bit before he realizes that the man he is talking to is not his henchmen but rather Frank Castle. Frank begins lighting up the bar with bullets and eventually comes face to face with the owner once again. During their confrontation, the owner reveals that he can give The Bank to Frank. Clearly this means something significant to Frank Castle as we cut away from the scene. 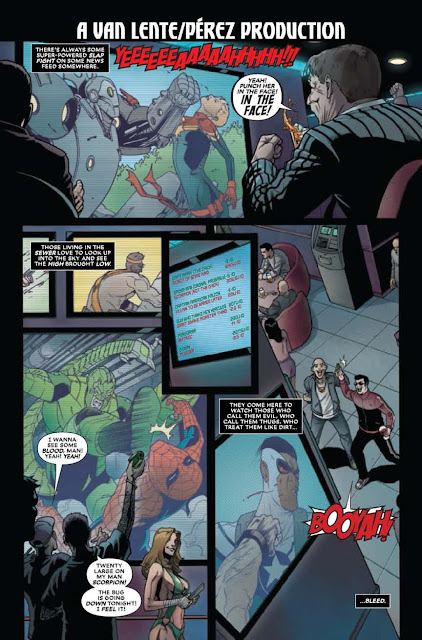 We cut to Deadpool who is going through a slideshow with his good friend The Bank surrounding his most recent job. Turns out the two have been friends for a while and The Bank has been taking care of Wade’s money even before his Weapon X days. Once the show is over, a young child runs in, wearing a Deadpool mask. He and Deadpool play around a little bit and the young child is revealed to be The Bank’s son. We then get a scene with Frank Castle’s dialogue which explains all the intricacies of The Bank’s operations. During this we get to see The Bank’s much younger and very attractive wife. She welcomes Wade Wilson into their home as well and even does some harmless flirting with him. It’s clear that Wade has become a welcomed sight in this home.

This is when we finally see frank again. He is sneaking through the house when he is found by the son. The son’s nanny catches up with him and realizes that there’s an intruder. She and Frank engage in a fight and Frank notes that she seems to have an extensive knowledge on Krav Maga. However, despite her formidability, Frank is able to knock her out quickly and goes on the attack. He opens fire and takes out The Bank’s bodyguards one by one. This is when Deadpool chooses to join the fight. However, The Bank’s wife grabs their son and rushes out, determined to save their lives. She hops into their car and turns the key only to have the car explode, killing both her and her son. 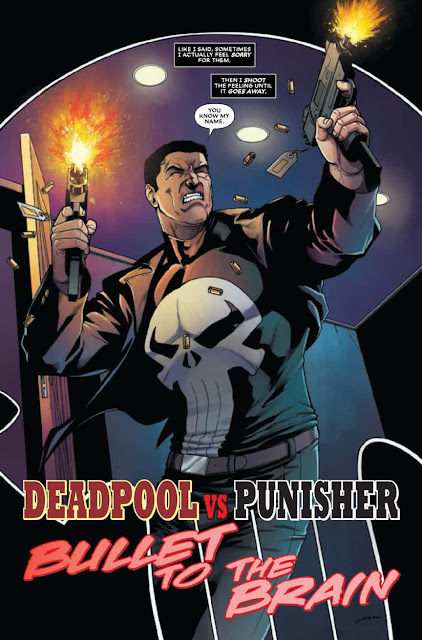 We cut to the future, after Frank Castle has escaped the scene and fled back to his safe house. He is injured and has lost a lot of blood but something about his place doesn’t seem right. Everything in his safe house is gone. This is when Deadpool reveals himself. This is when a confrontation begins between the two. Turns out that Deadpool took all of Frank’s things and even took out his security systems. Deadpool has taken it personally that The Bank’s family has died because of him. Frank insists that he is being set up but Deadpool isn’t listening. The issue finally ends with a quick draw. Frank is faster and puts a bullet through Deadpool’s head, making him unconscious. This is where the issue leaves us.

Series like these are something that I am a really big fan of. Deadpool has been dominated by Duggan’s run for years now and it is an amazing run. It’s probably one of the best Deadpool runs ever. That said, there are so many people who have ideas for this character and series like these are able to provide those opportunities and I have to say that this writer really gets both of these characters. The way they interact with others and the inner dialogue that both give are spot on. This team has really made an incredible first issue for a versus book because I get the feeling that these two are on equal footing right now. Sure, Deadpool has a healing factor that prevents him from being killed but Frank’s mortality has forced him to become more precise when it comes to fighting. I’m a big fan of this issue and I can’t wait to see where this leads us.

It may seem like the beginning to yet another disposable versus book but this issue really shines. The creative team showed incredible skill in understanding who these characters are and really nailing the voice that each has. Despite the fact that these characters are different, it’s nice to see the writer acknowledge how they are also similar and in some aspects, they mirror each other in this issue. This was an exciting and action filled beginning to this series and if the rest of this series is this good, we are all in for a treat.