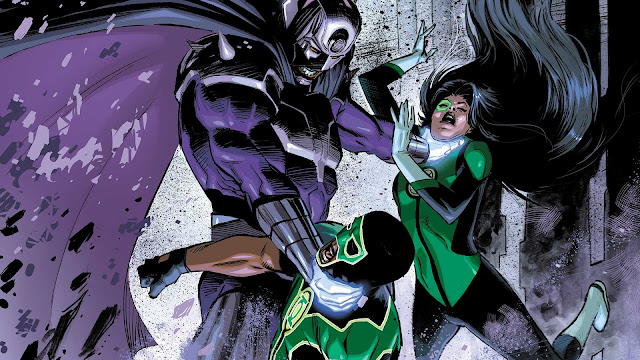 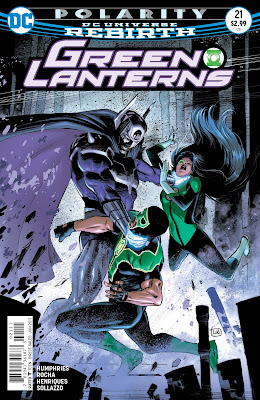 Can our heroes take on this classic Green Lantern villain?  Can they do it and also save that villain's brother's life?  Yeah, we got some questions here when it comes to Doctor Polaris and our Green Lanterns, but what I really want to know is, do we really need to keep making the connection to Doctor Polaris' dying brother and Simon's brother-in-law Nazir from when he was in a coma?  Yeah, I know we need to catch new readers up on Simon's past a bit, but it's starting to feel too over the top, especially when we have a villain that totally needs an ass whoopin' before he causes some serious damage.  Let's jump into this issue and see if the Lanterns can save Doctor Polaris' brother Seth like Simon cured his coma-ed up brother-in-law from when he first got his ring.  Let's check it out.

Our issue begins exactly where we left off previously, with Seth Emerson dying in his bed, but before we can do anything about it, we first have to have another go at Neal Emerson's theater of the mind, where he tells his brother that he was always there for him back when he needed it and that he'll be there for him now.......... Yeah, it really doesn't do much for the story, especially when it's made clear that for all his boasting about how he could cure Seth of his cancer with his magnetic powers, we see him totally fail, which leads Simon to plead with Doctor Polaris to let him go so that he can try to help his brother. 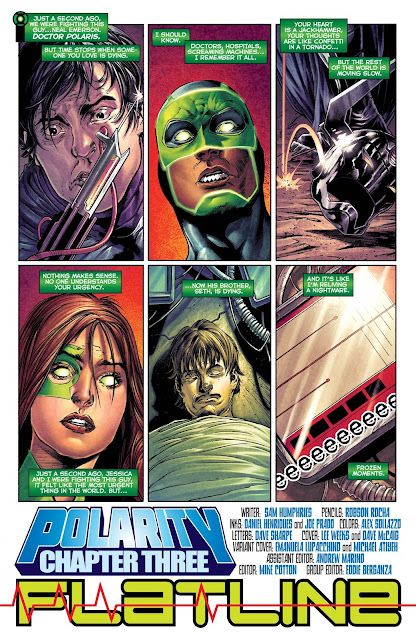 Yeah, we've seen Simon bring Nazir out of a coma somehow using the ring and we hear all about how he went through a similar situation as the one going on right now.......... even though he never did, but for all his willpower and all his might, it seems that Simon isn't able to bring someone back from the dead.......... or even resuscitate them, which leads Doctor Polaris to lose his goddamn mind even more than he originally had.  Even though Neal says goodbye to his brother in his mind as he fades away and his brother tells him that he can do a lot of good in this world, it seems that the villain voice inside of him is too strong and Doctor Polaris leaves our heroes so that he can go outside and pull the damn Justice League Watchtower out of its orbit and kill everybody in Gateway City.  Yeah, I don't know why he decided to do this out of nowhere, but I'll just go with grief is a hell of a thing. 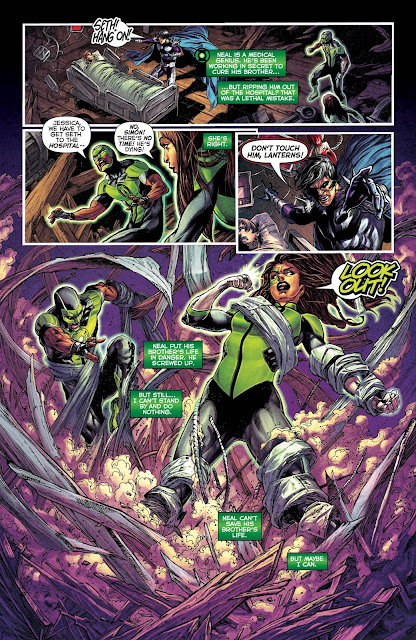 In the end, our Lanterns finally charge up their rings and go 100% willpower........ whatever that is and make constructs powerful enough to put the Watchtower back in its proper orbit.......  I guess they just let Doctor Polaris go because all we see of him is his inner voice getting Neil to blame the Lanterns for his brother's death and our heroes getting sent to Mogo so that they can begin their training and meet the rest of the Corps. 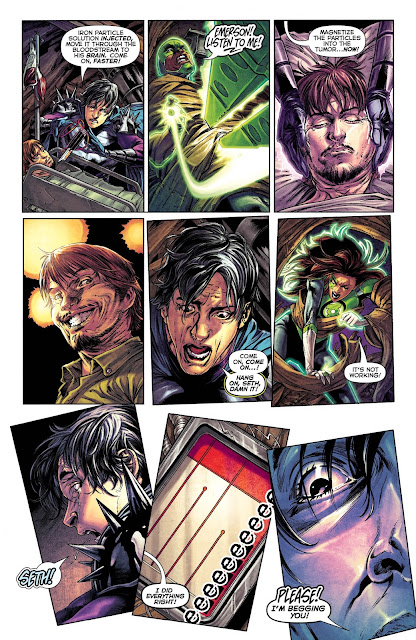 That's it for this issue of Green Lanterns and where it started out as just more of the same of everything we've already gotten out of this arc, it did turn into something interesting when Simon wasn't able to save Doctor Polaris' brother and then had to go and save the goddamn day by stopping the Watchtower from crashing into the Earth.  While all of that was cool, in the end it really just went and showed that our heroes could work together to get something done because besides for that, there really wasn't anything to this story arc.  I guess they went and made an enemy of Doctor Polaris, but who knows when we'll see him again.  The art in this issue was okay, but the coloring made some of it come off as odd and I think that because of that this issue is probably the worst the book has looked in this arc, but it's still half decent overall.  All in all, there wasn't much to this arc and I can only hope that the next one will pick things up a bit and get us back on our Volthoom ride that was interrupted out of nowhere.

While the second half of this issue really made things interesting, the rest was just more of the same stuff that we've gotten throughout this arc and ultimately, it went nowhere.  The art was half decent, but even that seemed to be lacking in the color department and I'm seriously just left wondering if we had all of this to just simply establish a vendetta for the villain of this story.