Odyssey of the Amazons #4 Review 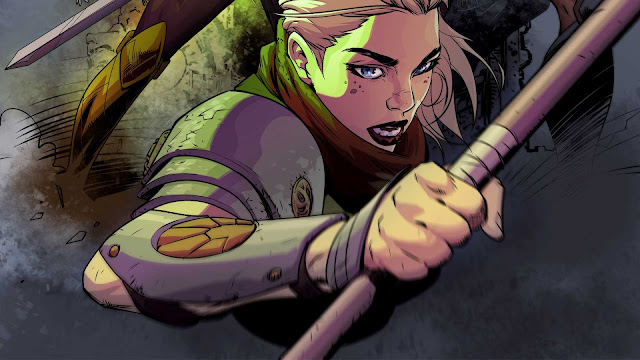 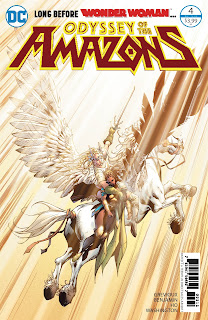 I have not been a fan of this series from the start.  It's been a mess of a story that just seems to throw characters and mythology at the reader with the hopes that they can sort through it and make some sense of it.  I guess I'm a big dummy because I've been lost since page one.  I have been hoping that eventually something would click and the veil would be lifted on a good story, but sadly, that hasn't happened yet.  Is this the issue that finally does happen?  Let's find out...


Of course, last issue ended with a hell of a cliffhanger...everyone died!  While it's kind of hard for some books to go forward from there, this is an Odyssey and that Odyssey now takes us to Valhalla! I almost rolled my eyes at the mashup of mythologies, but I have to admit, this may be the best thing to happen to this book yet.  The reason for that boils down to two things...it's kind of fun and allows Grevioux to tell a pretty straight forward story.

We get some cool fighting, a little bit of information and Thor!  Yea, you can't copyright a Norse God so we get Thor and the only thing that sucks is we don't get more. 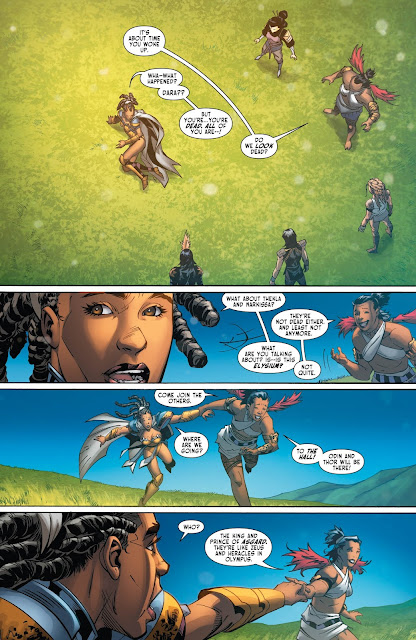 Obviously, we get the Amazons as well and while some are content to stay in Valhalla, Hessia knows they don't belong there and longs to leave.  However, before any of that, we get a pretty cool battle, a truce between Narkissa and Hessia and the knowledge that the women of the world, whether Amazons, Valkyries or other, are all sisters through and through.  The last part is something I was glad to see after all the fighting of last issue.

We do get a tiny peak at the captured Amazon sisters (remember them?) and things don't look good.  They rightfully decide nobody is coming to their rescue and resolve to save themselves.  Why didn't they do this before? 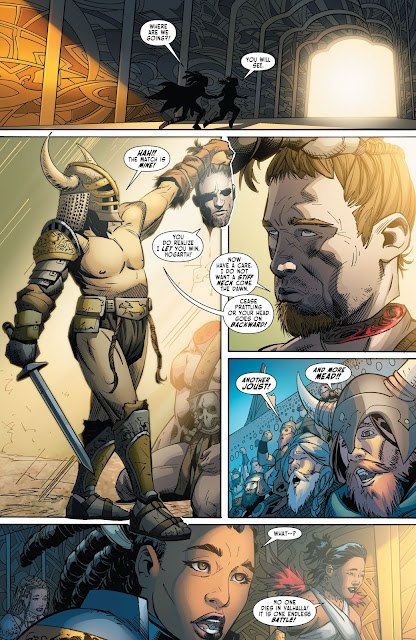 We also see what the Jotun are up to and it's not pretty.  The Amazon-Jotun hybrids are ready to go and it looks like they have Ragnorok in their sights.  Sure, there are a ton of names mentioned in these parts that I have no idea about, but the end of the world is easy to put my little brain around and these guys want to sway the odds in their direction.

This is a very quick read and while it isn't perfect by any means, it is probably my favorite issue of the series.  I don't even think it fits well into the series itself, but maybe that's why it's better.  Who knows, I'm not going to look a gift horse in the mouth.

While I am far from a fan of this series, this issue is the best of the series.  The story is straight forward, the art is good and it begins the setup for a grand finale that may just be the end of the world.