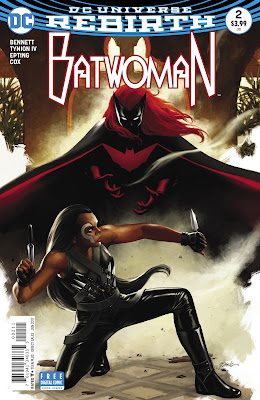 I may have gotten a little carried away with the previous issue of Batwoman. Don’t get me wrong, I did enjoy it and certainly more than the Rebirth issue. That being said, I think they hype got to me and the jump in quality made me think it may have been better than it actually was. It didn’t age well for me. Over the month, I found myself thinking on the book and coming to realize that there were some big issues that I had with it. That said, I don’t think it was bad by any means and I’m still excited to see where this series goes from here. We’ve set up a new backstory for Kate and we are about to dive into it so let’s just jump right into this new issue.


We a scene of when Kate injured herself in the water and was saved by Safiyah interchanging with a scene of the two enjoying a romantic moment together, laying in a field and feeding each other. This is where we learn that Safiyah owns a bar called the Desert Rose and that she uses it as her base of operations. As Kate and Safiyah enjoy their time together, they are watched from the shadows by a familiar looking woman. The two are interrupted by Rafael as he informs Safiyah that it is time to gather the various crime lords of Coryana. We cut back to the present where Kate is holding Rafael’s body. She tells Julia that she is going dark and obviously angers Julia in the process. Julia, of course, doesn’t take this laying down though and sends three drones into the sky to monitor Kate. 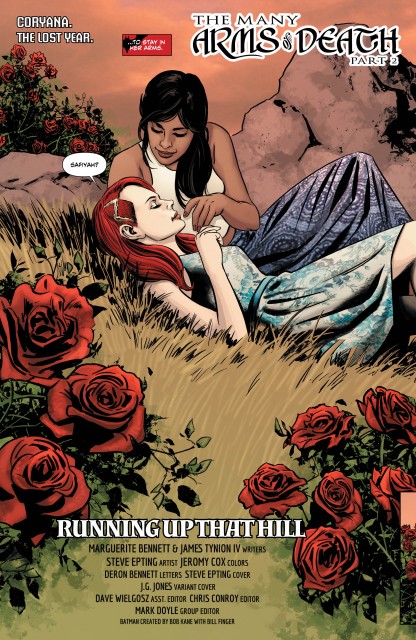 Kate carries Rafael’s body up the mountain until she reaches The Desert Rose. It’s at this time we get a fucking mountain of exposition as we learn about each and every crime lord that Safiyah used to meet with. Overall, we simply learn that Safiyah was something of a peace keeper between these criminals She would advise them and settle disputes. Kate breaks into the now closed down Desert Rose and discovers that Safiyah is long gone. This is when she is interrupted by the assassin from before. The two clash and when the assassin has Kate pinned down, she reveals her identity. Turns out it is a woman named Tahani. She is the same shadowed figure that we’ve seen in Kate’s past. The one that worked for Safiyah. Tahani reveals her new name is Knife (Really? That’s the best you could come up with?) and attempts to end Kate’s life until she is interrupted by the drones that Julia had put into action before.

One of the drones somehow gets a hold of a bottle of booze and uses it to light the torch that was the signal to meet when Safiyah was in charge. Tahani seems to believe that no one will come but is caught by surprise when she is proven wrong. Outnumbered, Tahani flees and cuts off the hand of one crime lord on her way out. As she leaves, she reveals that she blames Kate for Safiyah’s disappearance. In the aftermath, Kate and the crime bosses take the opportunity to give us MORE exposition as we learn what happened to Coryana after Kate left. A corporation came in and started buying up land and Safiyah, still affected by Kate’s departure, didn’t fight back and eventually left Coryana. We then catch up with the Kali Corporation which seems to have most of the land in Coryana now. They are up to many other shady business practices as well and as the issue comes to a close we learn that the Many Arms of Death is run by the two sibling in charge of the corporation. In addition, Knife has been working for them and they seem to have plans for Kate Kane. This is where the issue leaves us. 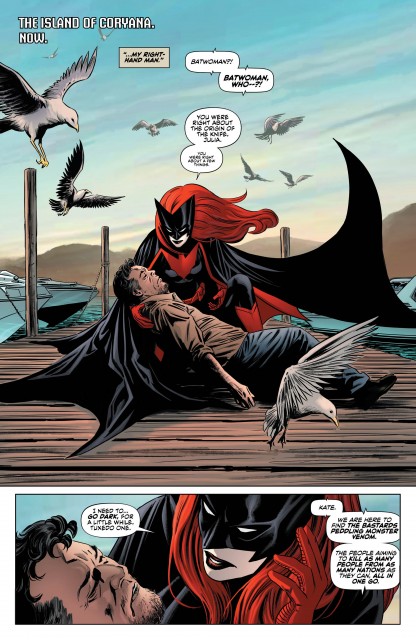 Well… this issue gave us a lot of information. That said, there wasn’t a whole lot that I really liked about this issue. Kate “goes dark” at the beginning of the issue but seems very aware that Julia is watching her so I don’t understand the point. We learn that our assassin is from Kate’s past (big surprise…) and has the lamest alias ever. Then we get introduced to a large number of character who are completely unmemorable and seemingly are only around to give more exposition in an already exposition heavy book. Finally, there is just a lot of questionable choices in this book. First off, everyone just seems to know who Kate is, despite the fact that she is wearing her Batwoman outfit (kind of negates the need for a mask) and Knife flees because she is threatened by the crime bosses but then easily just cuts that hand off of one as if he was nothing. However, as many criticisms as I can give this book, the worst one is that the book is boring and unmemorable. Despite the large amount of information given in this issue, I don’t really remember any of it and I don’t feel a need to. This series is a bore so far. I was so excited after the first issue and time has soured that excitement and this new issue hasn’t done anything to reignite that fire I felt.

Batwoman #2 is at best predictable and at worst a complete waste of my time. Batwoman is one of my favorite comic book character of all time. I shouldn’t be bored by her comic. This issue simply throws exposition at the readers and expects them to remember it but it doesn’t give us a reason to remember. At this point, it all seems like a bunch of arbitrary details that will be slightly important for this story arc and this story arc alone. In addition, for all the praise that the artist has gotten, I expect some far better art than we are getting at this point in this book. A die hard Batwoman fan like me can’t even get behind this book so far. What hope do we have for a new reader? I’m begging for this book to get better but I have yet to see anything that’s going to keep my attention long.