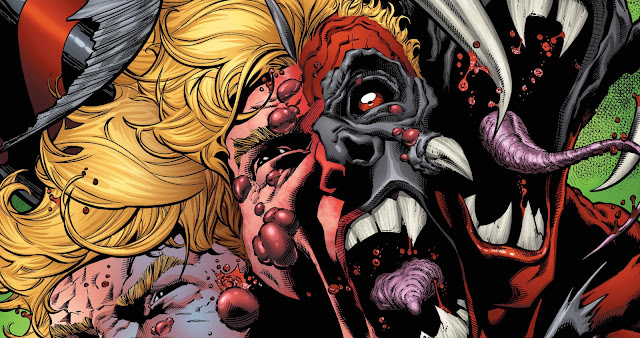 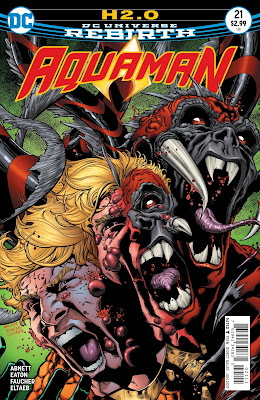 Once more into that Strange Water…that reminds me of a time I got really drunk on Wild Irish Rose. I actually drank Wild Irish Rose a bunch of times in my younger days, not only because it was cheap, but because I believed it brought me a state beyond being merely drunk that was closer to tripping on mescaline or smoking dust. Anyway, one New Years, I got two bottles of Wild Irish Rose—the big ones, not the flask-sized bottles—and went to a party in my neighborhood where I proceeded to drink one in record time. I blacked out after that, long before midnight. I was later told that I was belligerent and combative to some people asking directions and walked into a local bar with a half a bottle of Wild Irish Rose sloshing in a bottle, demanding more drinks. I woke up in all my clothes the next day, and then learned that I’d peed in the stove. Come to think of it, that experience isn’t really one that I remember. But I’m all sobered up now, and I definitely recall the events of Aquaman #21, which I’ve reviewed right here!

Now that everyone at the research station in the Gulf of Mexico has realized that simply interacting with Strange Water doesn’t necessarily mean you turn into Dead Water, they’re freaking out. Mainly, Arni of the FBI. Boy, is she jittery. Whenever people are arguing, or Scavenger suggests that the Aquamarines drop their nukes on Strange Water, or even if someone gets a little cranky because they’re feeling hungry, Arni doubles over and starts sweating. We know that Dead Water is triggered by intense emotion, so it’s either got to be that or she’s a heroin junkie jonesing for her fix of horse. That sounds like authentic junkie slang, right? I culled it together from comic books. 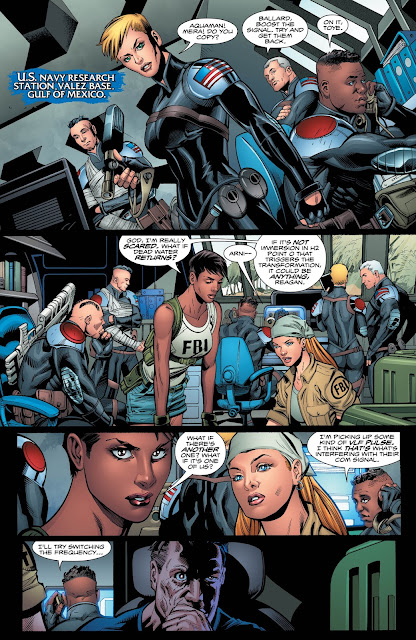 While people topside are in a snit, Arthur and Mera descend deeper into the Strange Water, and discover it’s actually a portal to another watery planet…an undersea portal that is not unlike a “throat.” I can’t “rim”ember where I “pacific”ally heard of this concept, but I do think it’s okay if a bit derivative. The alien world through this portal is very strange and wonderful, and I would have liked to see a lot more of it really. This issue spends far too much time at the research station, teasing a reveal that is telegraphed on the very first page, and not enough time detailing crazy-looking fish and weird extra-terrestrial stuff that would indicate a planet’s “otherness.” Part of the problem is that the world underwater on our own world looks plenty alien to most of us land walkers, so I think you’ve got to be way more “out there” to qualify as sea life from across the galaxy. 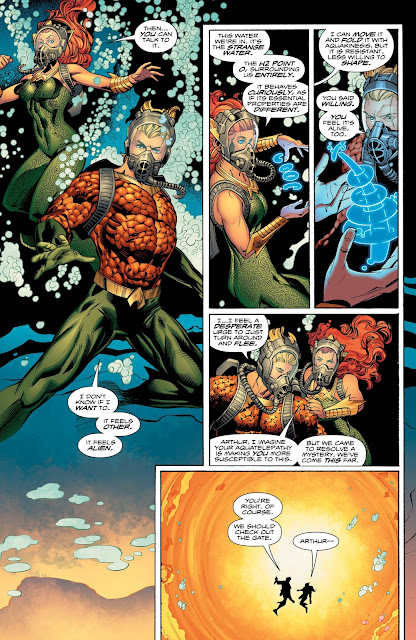 Anyway, eventually Arni snaps out and turns into Dead Water, but before that there is a tease for the next story arc in Aquaman, which looks to be a coup bubbling up in Atlantis to take the throne from Arthur. This issue mainly treaded water...uh, pun not intended, leaving us not much father along on what is really the fourth issue of this story arc, though the first issue was almost totally New 52 recap. Still, this story should be a lot more dynamic and fast-paced, or it should have been done by now. A good formula to follow, if trying to build suspenseful tension, is have at least one sneak killing each issue. But I still would have capped the thing at three. The general tale is too dull as it stands to warrant this many issues. The art looks great, and the two-page spreads of Aquaman and Mera hanging out in another water world do look cool, but they could have looked a lot wilder. Just saying. 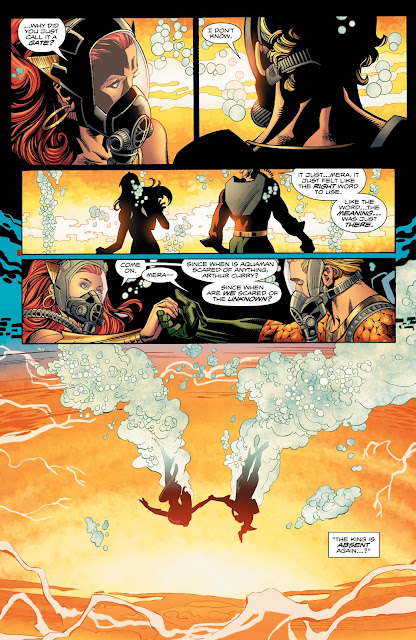 Some interesting developments with Strange Water and an incremental passage of time still left me a little disappointed in this underwater horror tale that's just going on too long. The arc should be shorter or the story should be better. I like the basic conceit, but it ain't jaw-dropping.